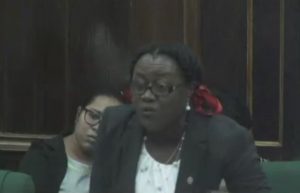 She announced that GYD$2 billion have been set aside in the 2017 National Budget to begin the mapping exercise by the Geological Surveys Department of the Guyana Geology and Mines Commission (GGMC). “This government will support the mapping out of this country, the entire country by 2020,” she said. The search would include the identification of water sources.

The previous government had sealed agreements with Iran and Canada to map Guyana for minerals. A  private company had also been contracted to survey the New River Triangle for rare earth minerals, but that exercise never got off the ground due to concerns about transparency and that deal was subsequently cancelled.

Broomes further announced that she and Senior Minister, Raphael Trotman would “hit the ground running” in the six  mining districts from January to March, 2017 to ascertain the number and location of dredges,  assess the condition of the water and identify the number of mining properties as well as engage in occupational safety and health awareness.  “We will educate, we will train on ground Mr. Speaker. We will deal with the matter of safety on the ground in the pits where the miners are. We will be there with the miners; we will walk the walk with the miners,” she said.

Just back from Bolivia, she also announced that early next year experts would be coming from an institution in that South American country to examine the curriculum at the University of Guyana and train GGMC’s officers about laterite, all with the aim of preventing fatalities in Guyana’s extractive industries.