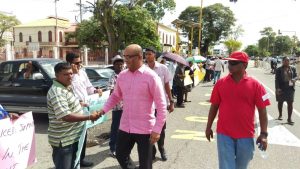 The  2017 budget debates begin Monday in the National Assembly, and arriving parliamentarians were greeted by a long line of PPP protesters led by several MPs including Opposition Leader Bharrat Jagdeo.

“It’s bad economics that many of the measures in the budget are not in keeping with even what the government says its goals are.
These measures run contrary to the ‘good  life’ goal, and keeping cost of living down, [as well as] boosting the economy,” Jagdeo said consoling his party’s supporters outside Public Buildings this morning.
Jagdeo challenged the over 200 tax increases made this year since this is the David Granger administration’s second budget presentation for the year.

“We can achieve objectives of growing this country, [and] improving welfare of ordinary people without all these tax measures if its done creatively,” Jagdeo told the press corps in the piercing morning sun. 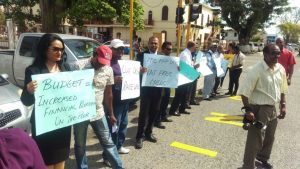 PPP MPs picket outside Parliament Building ahead of the commencement of debate on the 2017 National Budget.

Asked how the Opposition intends to affect the budget since it does not have a majority in the National Assembly, Jagdeo said, “we can only call for it. We can point out the logic on the need to withdraw the budget.”
“We can point out the logic, we can urge them to do so,” Jagdeo continued, “but they have arrogantly used their one-seat majority and it’s a silly thing they’ve done to pass legislation that are harmful to people and now they’ll use it again. From the mood i see… they have no plans to withdraw anything.”
Opposition MP Dr Vindhiya Persaud said the budget does not go well with this administration’s idea of a green economy. “How do you tell the pensioner who got $800 increase on their pension that they have to pay 14% on water and light and these are essential things that people use everyday,” Dr Persaud questioned.
“How are you going to tell the housewife who is already struggling to budget that what was once zero-rated is now tax-exempt and that cost from manufacturers and those providing services will now be passed on to her at home.
Moving on to social services, Persaud said the budget does not provide for the single-parent woman, and there is little mention of the Childcare Protection Agency.
Budget debates will continue into the next four days.