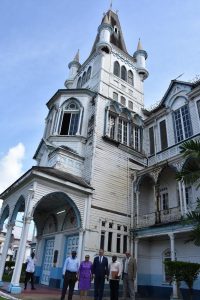 The European Union and the Georgetown Mayor and City Council have signed a contract that will facilitate a study for a Comprehensive Restoration and Sustainable Conservation Management Plan for City Hall.

The Contract which has been awarded to EURONET Consulting GEIE for EUR 279,196 [G$64M] is expected to be concluded by March/April 2017, the EU Delegation said Monday in a statement. The team will include experts from both Europe and Guyana and the National Trust of Guyana and City Hall will be actively engaged during the period of consultancy.

The core of the assessment will involve conducting a condition assessment and evaluation of the physical and structural state of City Hall and the City Engineer’s Building; preparation and presentation of a comprehensive green restoration plan and a sustainable conservation management plan for City Hall and the City Engineer’s Buildings and facilitating training sessions and strengthening capacity within the relevant stakeholder agencies.

EU Ambassador Jernej Videtič highlighted that ”Georgetown’s iconic City Hall and the City Engineer’s Buildings built in 1889 are unquestionably among the most outstanding architectural, cultural and historically significant buildings in Guyana.” Ambassador Videtič added that, ”the EU was delighted to help by funding this study, which will hopefully lead to a process that will see City Hall returned to its former glory”.

The City Hall and City Engineer’s Buildings are a part of Guyana’s tangible heritage and are considered important to the Nation’s historic fabric. In a bid to preserve and promote its cultural heritage value internationally Guyana became a signatory in 1977 to the Convention Concerning the Protection of the World Cultural and Natural Heritage, the first Caribbean State to do so.