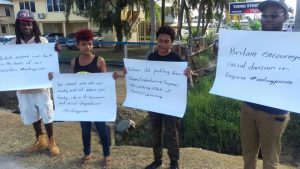 A loosely knit group of Guyanese protest as Prince Harry laid a wreath at the British War Memorial in Eve Leary.

Britain’s Prince Harry arrived in Guyana Friday afternoon to a red carpet welcome and immediately embarked on several official activities, only slightly smudged by a small group of protesters who called for an apology for British colonialism and slavery.

Greeted by Foreign Affairs Minister, Carl Greenidge and Britain’s High Commissioner, Greg Quinn; the fifth in line to the British throne took the General Salute from a detachment of ceremoniously-dressed members of the Guyana Defence Force (GDF).

He laid wreaths at the Independence Arch, Brickdam and the British War Memorial at Eve Leary as well as met with President David Granger at the Ministry of the Presidency and toured the  GDF’s Headquarters at Camp Ayanganna.

It was while he was at the War Memorial that a small group of Guyanese registered a public call for an apology for the impact of European colonization. “We are here today and we are asking for an apology because he is a representative of the Queen and we are here today to ask for that apology. We might not get but we need people to know that we have not forgotten the effects that colonization would have had on us both mentally and economically as a country,”  said Akola Thompson from the picket line.

Thompson was among four youths who came together to stage the peaceful picket at the corner of Young and Parade Streets, Kingston. 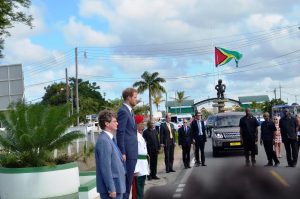 Prince Harry inspecting the Guard of Honour near the Independence Arch, Brickdam where he laid a wreath. Guyana attained independence from Britain on May 26, 1966.

The placards stated “British empire was built on the backs of our ancestors #notmyprince and “You cannot come into my country and not address your family in its economic and social stagnation #notmyprince and “Britain encouraged racial division in Guyana #notmyprince “ .

Guyana is among the 13 other independent Caricom member states that have agreed to press Britain and other European countries for reparative justice. Suriname’s former mother country was The Netherlands and Haiti’s was France.

While here, Prince Harry will Saturday visit Surama Village where he will hear more about traditional village life, and take a short trip to the village’s Eco Lodge to see how the community is embracing eco-tourism.

Prince Harry will meet with rangers to learn about the work carried out at the Iwokrama Reserve, and how steps are being taken to protect this important forest. Before arriving at the reserve, Prince Harry will briefly call into Fairview Village.

Also on Saturday, he will visit Kaieteur Falls, the incredible single largest free-fall waterfall in the world, with a drop of 741 feet, making it nearly five times as high as Niagara Falls in Canada.  Prince Harry will embark on a short trekthrough the jungle to reach the falls with local guides who will explain the local flora and fauna of the area.

On Sunday, he will visit Joshua House Children’s Centre where he will see how Joshua House supports vulnerable young children in Guyana, between the ages of 5 and 12. Prince Harry will tour the facility, and meet both the children and staff who live and work there.