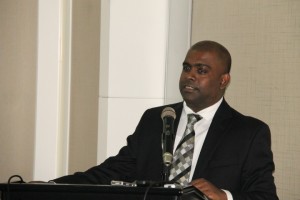 Chairman of the PSC’s Finance and Economic sub-committee, Ramesh Persaud

Guyana’s umbrella business organisation, the Private Sector Commission, on Thursday said the 2017 National Budget appeared to have left the country directionless, with no clear position on government’s much touted green economy and mixed signals on the future of the ailing sugar industry.

“We are still not very clear on the overall direction in which the country is heading. We don’t have certainty of plans…,” he told a news conference at the association’s Waterloo Street, Georgetown.

Persaud slammed the GYD$250 billion fiscal package as one that contains a “switching around of plans” such as the eliminating of zero rated items on the list of VAT-able items in contrast to the adding of several others.

“Those lines of uncertainties worry business that have to continue in the long term,” he added.

Turning his attention to government’s Green Economy plan that aims to reduce the reliance on fossil fuels like Bunker C fuel, diesel, gasoline, kerosene and cooking gas in favour of solar, wind and hydro power, the PSC official declared that the business community was “unclear what the government means about a Green Economy.”   “It is not clear and either the government has not been explaining themselves… ,” he said.

With government poised to announce that the state-owned Guyana Sugar Corporation (Guysuco) would be shedding certain operations in an effort to reduce reliance on multi-billion dollar bailouts from the National Treasury, fellow PSC Executive Member, Ramesh Dookhoo  charged that the APNU+AFC has merely been looking at the sugar industry through accounting eyes.

“There is a paucity of economic analysis regarding Guysuco’s contribution to the overall economy. What we are hearing is an accountant’s perspective,” said Dookhoo.

He added that government has been sending mixed signals about GuySuco including the holding of a Commission of Inquiry and the employment of the same persons who were there before. He advised government to release the several studies on GuySuco and engage a wide cross-section of stakeholders beyond just the unions.

Guyana is expected to record a 2.6 percent real economic growth  at the end of 2016, down from a projected 4.2 percent largely because  exports, except gold, have performed poorly. Construction, mainly in the housing sector, has slumped.

Growth in 2017 is projected at 3.8%, largely with expected good performances in mining and quarrying, construction and infrastructural development. Sugar will again not do well and, according to the Finance Minister, the rice industry will stagnate.