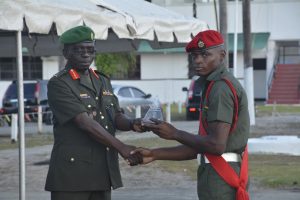 Nineteen Sergeants are the most recent graduates of the Guyana Defence Force Sergeants Academy, the army said in a statement on Thursday.

The new Sergeants graduated on Wednesday, November 30, at Base Camp Stephenson following a graduation parade attended by Officers and Ranks, as well as the parents and relatives of the graduates.

Welcoming the Sergeants to the Corps of GDF Senior Non-Commissioned Officers, Chief of Staff, Brigadier George Lewis exhorted them to uphold the Values and Standards of the Force.  “You will be tested and will be expected to do your best at all times. The test of your discipline is when you do the right thing when unsupervised,” he said. “The knowledge that you have gained will guide you, but it is your competence, loyalty, discipline and leadership ability which will determine what mark you will make in the various Units in which you serve.”

Explaining that their task will be to support their superiors, the COS emphasised that there will be many instances when they must lead in the absence of the Officer. “Working with your superiors and subordinates, will demand that you be accountable, give and demand respect, and engage in appropriate conduct. Remember though, that respect is earned. The most important trait to be exhibited is your good character. That character must be grounded in the Values and Standards of the GDF!” he was quoted as saying.

and the award for being the Best Shot. SGTs Runnel Gordon and Selwyn Williams rounded out the Awardees copping awards for Best Fitness and Best Drill respectively.

The Sergeants Academy has been established to create a professional cadre of Senior Non-Commissioned Officers, who, from time immemorial, provide the vital link between the Officer Corps and the Junior Ranks in the command matrix. The Academy focuses on providing leadership training for potential Sergeants via the Capstone Leader Sergeant Course. The eight-month course, introduces the Aspirants with the knowledge, skills and attitudes necessary for them to become leaders in the contemporary military operating environment where national security threats are becoming more diverse in nature. The values of the Academy which provide the bedrock for the professional development of the Aspirants are; Leadership, Competence, Discipline, Loyalty.

These sergeants will, over the course of time hone their leadership skills at the various Units to which they shall be posted. They are expected to continue to mature and grow as professionals and individuals as they pursue knowledge in the military and civil environment.

The Officers and Ranks of the GDF welcome the new Sergeants and wish them well in their endeavours.