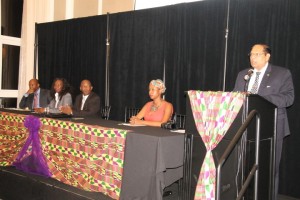 Guyana’s African Business Roundtable- an organisation that aims to develop sustainable Afro-Guyanese businesses in partnership with government- was Friday night launched with government in turn pledging its support.

Prime Minister, Moses Nagamootoo said government welcomes the establishment of the Afro-Guyanese business chamber, saying that African empowerment and self-empowerment have eluded the country for so many years.  He said efforts should be made to ensure that scholarships are so that companies would eventually have the required technical personnel when bidding for contracts. “I speak on behalf of the Government of Guyana here when I say that this initiative ought to be applauded. It is a modest start but in whatever way government can encourage you to pool your resources and to overcome the present challenges in Guyana, we will take those initiatives,” he said.

Opposition Leader, Bharrat Jagdeo said he is not opposed to the establishment of organisations but he cautioned against considering flawed business plans. “There is sound investment, good proposals etc and there is unsound investment and my fear is that whether you are Afro-Guyanese, Indo-Guyanese or Chinese or whatever or Amerindian, in this country if you put your money into the country there are a whole range of uncertainties and you run the risk of losing a lot of it because from what I see things are sliding every day, they are getting  worse and there is no move by the government to arrest this development,” he told a news conference on Friday.

The People’s Progressive Party (PPP)-led administration from 1992 to 2015 had been repeatedly accused of discriminating and marginalizing Afro-Guyanese including the growth of their businesses. However, Jagdeo has often countered by saying that  the economic condition of Afro-Guyanese has improved with the acquisition of houses, vehicles and businesses.

With several Indian organisations organising themselves globally, Nagamootoo  said “it appears to me that it has become acceptable that peoples of various ethnicities are organising themselves not only nationally but globally along economic lines.” He said there should be no conflict between affirming ethnicity and nationality at the same time.

Noting that Africans started off with an inherent disadvantage in accessing capital and wealth, he said unless there is an administration that recognises the need to right historical wrongs that segment of the population would still be faced with that plight.  “Until we have a situation where there is equitable division of the resources of the State and only a sympathetic government will be able to do that, an understanding government, you would always have conflictual situation because you will always the haves and you will always have those who have not,” he said. 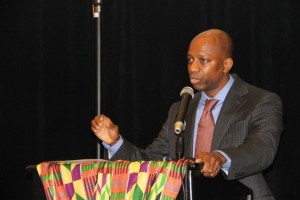 Board Member of the African Business Roundtable. Osafa George.

ABR Founding Board Member, Selwyn Osafa George sought to preempt criticisms that the chamber would be labeled partisan although it is a tough step to bring about inclusion, social cohesion and participation. “In a society as racially and politically divided as ours there will be an outcry at the formation of this group,” he said. “You will find that almost every Guyanese knows that Black-owned businesses are under-represented and sometimes often marginalized,” he said. George said unleashing Guyana’s potential requires the involvement of all marginalized groups, including youths and women, through a level-playing field.

Executive member of the African Cultural Development Association (ACDA), Eric Phillips said the Roundtable would, among other things, map Guyana’s private sector to understand its structure and available business opportunities for African businesses.  At the same time, Phillips said the ABR wants to see the equitable and sustainable economic development and the distribution of wealth across ethnic lines.

Phillips said the Chamber plans to contribute to President David Granger’s public request for African organisations to come together to present his government with plans to address economic, cultural, political civil and educational obligations in keeping with the United Nations-designated International Decade for People of African Descent.

ABR’s planned services include a business incubator, working with the Georgetown Chamber of Commerce and 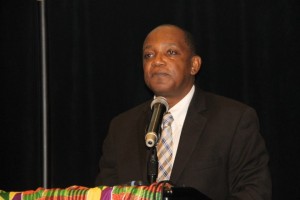 Industry, Small Business Bureau, Inter-American Development Bank and others; a marketing and business research centre with a full-time economist, provision of business services to small and medium enterprises, youth entrepreneurship programmes, training and skills development, networking, lectures and the publication of a business magazine to promote “our icons.”. “Some of these functions are out of strategic need to educate and involve all communities in the area of entrepreneurship and village community revival as well as local job creation,” said Phillips.

With the ABR’s activities hinged to the United Nations Sustainable Development Goal of ensuring inclusive, equitable and sustainable growth, Phillips said the Afro-Guyanese Business Chamber was somewhat different from other business service organisations like the Private Sector Commission, Georgetown Chamber of Commerce and Industry and the Guyana Manufacturing and Services Association. “The ABR sees itself as a development partner with the government of Guyana. If the private sector is to be the engine of growth, then by default it has to become a development partner, not just a private sector and it has to be a development partner with the government and civil society,” he said. Phillips stressed the Black Chamber would promote the need to make profits and achieve excellence but not in isolation of government or a “rent-seeking owner of assets including assets belonging to the State.”

Prime Minister Nagamootoo acknowledged that such a model is workable for the wider benefit of all Guyanese if the research shows that it is feasible. “Where you have statistics showing that there is an inclination to enter into business, business must enter into partnership with the State that has the capacity to give incentives and concessions and even grants,” he said. He floated the likelihood of using some of Guyana’s oil wealth to develop the African community that had historically played a significant role in the country’s evolution.

The ABR plans to focus on, among other things, sustainable national economic development, economic revitalization, nurturing African entrepreneurship especially among youths and forging close links with the private sector and government.