“Living a good life” not key to salvation – ‘Pope Emmanuel’ 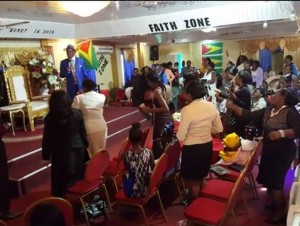 Self-styled Pope Emmanuel, Philbert London on Sunday said he has never preached that “living a good life” is the route to being saved, one week after he had apologised in the face of a raging sex tape scandal.

Unlike other Christian churches that believe that persons are saved because of the goodness that they have done, London told the mainly female congregation on November 20, 2016 that he has always taught that believing that Jesus Christ died for our sins and by grace through faith persons will be saved.

“I couldn’t advocate that. I never advocated that I am not saved by anything else but by the Grace of God,” he said. He also said regardless of whatever has happened “my Father , My God , the Lord Jesus Christ who manifested Him to me  promised that he will never leave me nor forsake me,” he told members of Beacon Ministries located at Upper Joseph Pollydore Street (formerly D’urban Street), Lodge.

A number of pictures and videos were released on social media, showing London having intimate relations with a number of women. He last week apologised to the church and asked that members forgive him because he would not wish what has happened on his worse enemy. He suggested that he was unfairly treated in the media in contrast to a rape allegation against a Hindu priest that vanished from the public’s limelight in two days.

“And so when these people who advocate they are living a good life…. never advocated that I am saved by anything else but by the Grace of God but what happened, they grouped me together with others who have been saying that…,” he argued.

London said the “Christian” churches have promoted the view that men of God are perfect. “People think that a man of God is faultless and flawless but the Bible says we are like Elijah, men of light passions.. They never said to people you are saved by Grace, it’s the goodness of faith through God,” he said.

London described the Christian song “The things I used to do, I do them no more” as “foolishness” and “ignorance.”

Reacting to calls for him to be removed as head of the church, he said he has forgiven them for their ignorance. In particular, London said he knew someone who was willing to confront one of those persons. “One of the persons calling for my removal…somebody said I wanted to be in church to look him in the face and tell him when you were married you and I were involved; remember? Now that person is calling for my removal. Now that is the hypocrisy that is existing,” he said.

He listed several instances in which persons had misbehaved towards him and his church and they ended up dying in road accidents or their properties burnt down.

Prior to London’s entry, Pastor Guy Griffith hailed the “Man of God” and the church as a place where people can receive several benefits including visas, healing and wealth by the “Pope’s” personal touch or contact or via his ministers, television broadcasts, publications and anointed products such as cloths, rags, handkerchiefs, soaps, paper, water, sweets, corn, wine and oil.