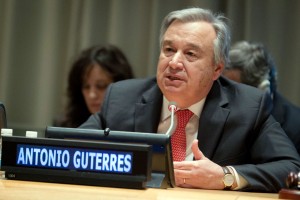 Foreign Minister, Carl Greenidge is  expected to lead a delegation to New York next week to meet with incoming United Nations Secretary General, António Guterres as part of Guyana’ s unrelenting quest to have the border controversy with Venezuela taken to the International Court of Justice (ICJ).

Minister Raphael Trotman told a post-cabinet briefing that the meeting would be part of a process of securing a final recommendation.

Director General of the Ministry of Foreign Affairs, Ambassador Audrey Jardine-Waddell is expected to be part of the delegation.

Outgoing UN Chief, Ban Ki Moon has already given Guyana’s President, David Granger a commitment to assess the next step by this month . Ban demits office at the end of December, 2016.

Canada’s High Commissioner to Guyana, Pierre Giroux earlier this week stated that he did not believe that Venezuela would accept an ICJ decision because that Spanish-speaking country does not recognise the court.

Venezuela instead wants the controversy to be once again put in the hands of a mediator on behalf of the United Nations Secretary General, a process that Guyana has already said has not found a solution in more than 20 years.

Instead, Guyana contends that Venezuela continues to be the aggressor and has gone as far as threatening or scaring away foreign investors onshore and offshore Essequibo.