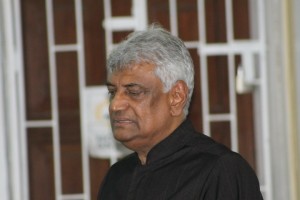 Now that the Dr Steve Surujbally is about resign from the post of Chairman of the Guyana Elections Commission (GECOM),  Opposition Leader Bharrat Jagdeo said he was awaiting word from President David Granger who must trigger the constitutional provision for a replacement.

The President must consult the Opposition Leader on appointment a chairperson for the elections commission.

“According to the Constitution, I have to submit a list of six names from which the President will chose the next head of GECOM. We have started looking at the names of the people that we will submit to replace Mr Surujbally,” Jagdeo said.  A number of by-elections are likely to be held in several local authority areas where there has been a tie between two parties.

Jagdeo said he has tasked Opposition Chief Whip Gail Teixeira with engaging Head of the Presidential Secretariat, Minister of State Joseph Harmon to inquire when President Granger intends to trigger the replacement provision.

That letter has not yet been sent.

Saying that it was important that a GECOM Chairman is in place at all times especially to oversee preparations for the next elections due by 2020, the Opposition Leader flagged concerns that the appointment of a new elections management chief could take some time. “This is very worrying for us, given the sloth of this government, its incompetence and the sensitivity surrounding GECOM we are suspicious that there may be a lengthy delay in that entire process,” he said.

Surujbally told Demerara Waves Online News early Wednesday evening that he hoped to resign from GECOM’s chairmanship by year-end. “The intention is to demit office. In my mind I have a time frame but the President wants a smooth transition,” said Surujbally who has served as GECOM Chairman for the past 15 years.

The veterinarian by profession said he has not set any specific date to leave office but noted that “I can’t seem myself staying on for the first quarter but i am not going to stay on unless necessity dictates that I do.”

Guyana still uses the more than 20-year old Carter Centre formula for the selection of a Chairman and the six other commissioners- three from government and the remainder from the opposition.

Observer missions by the Commonwealth, Carter Centre and the Organisation of American States have long urged that a new mechanism be developed to select and appoint the commission from a list of non-political persons.

The Opposition Leader underscored the importance of have a fully functioning Commission which is critical for preparing for the next elections.

The PPP’s representatives on the Commission, Bibi Shaddick, Robeson Benn and Sase Gunraj, expressed surprise some time ago that the Opposition Leader had not yet been informed, through the presidency, about Surujbally’s intended resignation.