Black Business Chamber to be launched

Guyana is set to have its first Black business chamber aimed at promoting and sustaining the development of enterprises owned by Guyanese of African descent, the organisation said in a statement.

“Part of its goal is to strengthen efforts at national development and achieving surety of economic inclusion through support for the growth of private businesses owned by Guyanese of African descent,” the chamber formally known as the African Business Roundtable (ABR) said.

The Black Business Chamber hopes to become “an organized conduit to government and other stakeholders in society” on behalf of Afro-Guyanese businesses with the aim of promoting the interests of those enterprises. President David Granger in August, 2016 urged the mobilisation of Afro-Guyanese to achieve measurable targets in keeping with the United Nations-designated International Decade for People of African Descent. 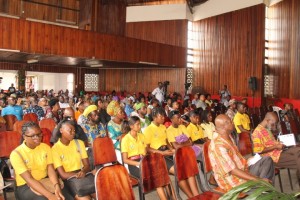 FLASH BACK: Attendees at the opening of Cuffy250’s Fourth Annual State of the African Guyanese Forum.

ABR would be launched on Friday, November 18, 2016 from 5 to 7 PM at the Marriott Hotel, Kingston, Georgetown.

It is being launched under the auspices of the African Cultural Development Association (ACDA) which has been hosting a series of planning meetings in recent months to prepare for the launch of the grouping.  The ABR was formed in part out of a need to strengthen the economy of Guyana and by the urgings contained in the United Nations General Assembly resolutions A/Res/68/237 and A/Res/69/16 dealing with the International Decade for People of African Descent and the Programme of Action associated with it.

“Part of its goal is to strengthen efforts at national development and achieving surety of economic inclusion through support for the growth of private businesses owned by Guyanese of African descent,” said the organisation.

The Chamber hopes to create opportunities for self-development and the transformation of villages into viable economic centres. The ABR will also seek to create training opportunities for members and collect, compile, analyze, disseminate and publish reliable statistical data for business decision-making.

“Towards these ends, the ABR will work with all persons, organizations, and institutions that seek to achieve the objectives of economic and social inclusion of people of African descent in the full enjoyment of Guyana’s patrimony in recognition of their uncompensated contribution to the development of Guyana, and in accordance with the objectives of the two UN resolutions in reference and the relevant provisions of the Guyana Constitution,” said the Chamber.

The ABR is an incorporated body and will be establishing a Secretariat with full a compliment of full time staffers.
Future plans include the establishment of sub offices in various administrative regions. The organisation plans to hold outreaches with African business enterprises in the Diaspora “as the organization grows from strength to strength.”