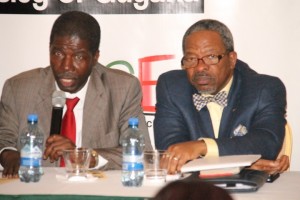 Canada predicts that Venezuela will not accept not accept a ruling by the International Court of Justice on the Guyana-Venezuela border controversy, as part of a plan to keep the issue alive.

“If it goes to the International Court of Justice, Venezuela does not recognise the ruling of the International Court of Justice and they will simply say ‘ we don’t recognise the decision’,” Canada’s High Commissioner, Pierre Giroux told a University of Guyana (UG)-sponsored  forum titled “After Obama, More History: Implications of the US Elections for Guyana and the rest of the Western Hemisphere.”

Guyana wants UN Secretary General, Ban Ki  Moon to send the controversy to the World Court before he demits office because for more than 20 years mediation has not yielded any success, but Venezuela insists that it wants the UN Good Officer media process to be revived.

Giroux noted that on Monday, Venezuela’s opposition and government formally agreed to, among other things, that they would never relinquish ownership of the mineral and forest-rich Essequibo Region. “This means that (Guyana should) look at the issue from the Venezuelan perspective. They will never let down the issue…because on that issue they are not a policy taker. They seem themselves as a policymaker so you want is mitigate and accept that it won’t be a solution. It would be there for a very long time whatever happens in terms of multilateral decisions,”  the Canadian High Commissioner said.

The Organisaton of American States (OAS) Representative in Guyana, Jean Ricot Dormeus predicts that Venezuela will do as much as it can to prolong the controversy over the area that makes up about two-thirds of Guyana’s 216,000 square kilometers. “I believe this controversy is there to stay. It’s not going to move away because it gives leverage to Venezuela, creating political opportunism. Look at that: It’s the only issue uniting the government and the opposition,” he said. 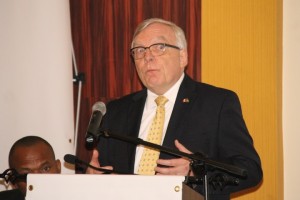 Neither Giroux, Dormeus nor UG Vice Chancellor Professor Ivelaw Griffith believes that Venezuela will invade Guyana and seize Essequibo partly because the US would not tolerate it and other South American nations will oppose a shift in their borders should Venezuela seize Guyana’s territory.

The Canadian envoy said Venezuela is wary of being isolated politically and economically on the global stage if it were to invade Guyana.

“I don’t think that Venezuela will go to the extent of actually invading Guyana and trying to take it by force because you are perfectly aware that this is where they will actually put in a place a series of existing mechanism that is in place for all nations. They will immediately be isolated politically because they will lose their support to countries who see them as a victim of American imperialism…then they will no longer be the victim, they will become the aggressor,” he said.

“An effort to unsettle the Guyana- Venezuela border is going to have serious implications for a whole lot of other borders in South America. I don’t think it is in United States’ interest to want to go there,”  said Griffith, who is widely recognised by the US for his analyses on crime and security in the Caribbean and the wider Western Hemisphere. Brazil, Suriname and French Guiana  could be affected by a shift in Venezuela and Guyana’s border.

Griffith does not expect the US to stand by idly and allow the destabilization of Guyana’s border, but he said a lot of the work would be done behind the scenes. “I don’t necessarily see them being active, being out front but the fact that you may not see things happening out front does not mean that things are not happening behind the scenes and so I would not be in any panic mode about a negative unintended consequence for our border with Venezuela in relation to any new action by President Trump,” he said.

The Turkeyen and Tain Talks is sponsored by the University of Guyana, and is aimed at stimulating public debate and discourse on topical issues.