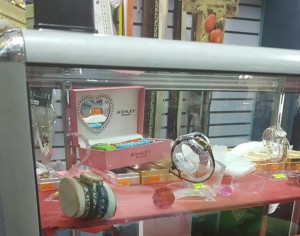 Persaud praised police and residents of Bartica for collaborating in apprehending the suspect who once lived at Cool Breeze which was recently affected by a fire and later on slept in stalls at the southern of First Avenue. “Even though the recovery hasn’t been one hundred percent, I’m still happy to know that we have somebody that would lead us to even more information, probably about the previous robbery. With the collaborative efforts of myself, police and residents, the police were able to make this arrest and as it turns it the items on him are positively mine,” the Deputy Mayor told Demerara Waves Online News.

Sources said 32-year old Calvin Douglas of New Amsterdam, Berbice is expected to be arraigned on a charge of break and enter and larceny.

“At the time of his arrest, he was found in possession of some of the stolen articles inclusive of a cellular phone and pieces of jewellery which were positively identified by its owner,” the Guyana Police Force said in a statement.

Police added that most of the items carted off between 3 AM and 5 AM Sunday last from the three-storey business premises at First Avenue, Bartica have been recovered. “Later, the suspect took investigators to a house where he handed over almost eighty-five percent of the stolen items. He has since given the lawmen vital information as to where the remaining items can be retrieved.”

The stolen items included jewellery, electronic appliances and gadgets, including cellular phones and an assortment of other items valued in excess of

Douglas allegedly gained through an eastern window, on the upper flat of the building.