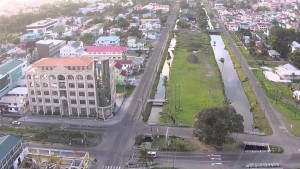 The University of Guyana’s (UG) likely rental of a five-storey building at the corner of Lamaha and Camp Streets, Georgetown has sparked off criticisms from a number of lecturers, but senior administrative academics are justifying the rental of another building off the Turkeyen Campus.

“The justification for renting a building by a cash-strapped university is, for instance, at least 20 university staff who do not have office and they have not had offices for years on campus,” the sources told Demerara Waves Online News.

The building, which is owned by Neil Sukhlall of Impressions Advertising, has already undergone inspections and integrity testing as part of the feasibility study to determine whether UG should rent it.

Former President of the University of Guyana Senior Staff Association (UGSSA), Meilissa Ifill has objected to the rental of the building based on what she has understood to be the need to have a presence in Georgetown. “Apparently it is even more irrelevant that UG cannot afford it. It is however fitting that the proposed UG Georgetown location is said monstrosity as it reflects the pretensions and ugly ambitions on display at UG. I reckon that the expensive flights of fancy and nontransparent hiring and spending practices if continued unchecked will bankrupt the university,” she said on her Facebook profile.

Another lecturer questioned the wisdom of renting another building, saying at a time when UG cannot even afford to buy stationery for its current operations.

Yet another lecturer, who opted to speak without being named, expressed surprise at the move and had hoped that the need for additional classrooms would have been taken care of with renovated space for the Vice Chancellor and Deputy Vice Chancellor and the construction of new registry and theatre buildings. “We do need space but I am not sure the scope is same given a number of number developments that are close to completion on campus,” the lecturer, who is a former UG administrator, told Demerara Waves Online News.

However, well-placed sources close to the UG administration told Demerara Waves Online News that the publicly funded tertiary institution badly needs office space for at least 20 members of staff and classroom space for several new schools that are expected to earn UG badly needed revenue. “If UG takes a building like that, they will sublet a part which would cover the whole cost of the rent so UG in reality gets it free,” said the source.

Those include a Business School, a School on Oil and Gas and  School for Psychology which are all expected to bring in revenue. One of the sources said UG hopes to sub-let the building to another entity to help defray the rent.  “There is very little space on campus for lecture halls,” the source noted.

According to the sources, it makes no sense for UG to spend time constructing its own building when it needs to urgently establish those schools to bring in much needed cash and raise the profile of the institution. “The idea is to rent for a couple of years and then build but if you have to wait until we have finished building and then build these programmes, it won’t make any sense if you have to wait until the next three or four years,” the sources said.