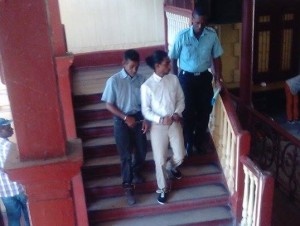 A security guard, who said he stole over a half million Guyana dollars  in items from an Industrial Estate bond because he wanted them at his home, will be spending nine months in prison although he begged for a light sentence

When the charge was read to him by Magistrate Delon Bess, the accused pleaded guilty to the charge of break and enter and larceny with explanation. He told the magistrate that he needed the things at his home.

According to the facts presented by Prosecutor Kevin London, the defendant works for the Virtual Complainant (VC) as a security guard at the storage bond located at Ruimveldt Industrial Site, Georgetown. On December 1, 2015 Rampersaud secured his bond with the items intact, left the defendant to guard the place from then til September, and went overseas.

London said that police, acting on information, went to the accused’s house and after conducting a search they found the items in question. Rampersaud, who had made a complaint on the missing items, was called by police and he positively identified them as his.

Before handing down his sentence, the magistrate again gave Hussain a chance to explain himself. The defendant said he committed the act, that he was sorry, and begged for leniency.

In response to this the magistrate said he understands and appreciates that Hussain confessed and chose not to waste the court’s time.

However, he said that the court cannot condone such acts since it is wrong. He then handed down the nine-months sentence.