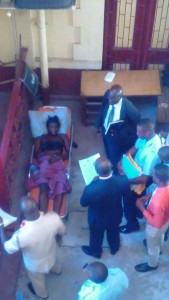 Mark Anthony in a stretcher in the Georgetown Magistrates Court yard while the charges were being read to him by Magistrate Delon Bess, as his lawyer and other officers of the court looked on.

An 18-year-old appeared in court on a stretcher on Tuesday afternoon, and was charged with robbery under arms, gun and ammo possession, and for firing shots at a policeman.

The first charge against Mark Anthony is that on September 26, 2016 at Georgetown, he discharged a loaded firearm at Roger Pilgrim. This he did with intent to maim, disfigure or to cause grievous bodily harm. He was not required to plead to this indictable charge.

The second charge read that on the same day, at Laing Avenue, Anthony robbed Tevin Williams of items amounting to $67,000, while armed with a gun. Williams was relieved of an I-Phone ($47,000) and a Blackberry cellular phone ($20,000). Again, the defendant was not required to plead.

Finally, on the same day, it is alleged that the accused had in his possession one .38 revolver, three matching rounds, and one .38 spent shell. He pleaded not guilty to this charge.

The charges were read by Magistrate Delon Bess, who took leave from the courtroom and went downstairs to read them to the injured prisoner.

According to Prosecutor Kevin London’s facts on the shooting matter, on the day in question, at about 22:50hrs, Pilgrim, who is a police office was in the company of friends in a car. He was dressed in civilian clothing at the time, and the car was traveling east along the West Ruimveldt Front Road when the defendant confronted him and discharged several rounds in the air.

As a result, the police returned fire, hitting the accused who fell to the ground. London said that Pilgrim relieved the defendant of his firearm, while himself being injured. A further search was conducted on the defendant and the two cellular phones were found. The accused was apprehended.

Meanwhile, Anthony’s mother was at the court seeking justice for her son, whom she claims police shot and now he cannot move. The young man’s brother also added that the accused, who was shot in his back and leg has been vomiting blood.

He was remanded to prison and the matter will be called again on November 15, 2016.