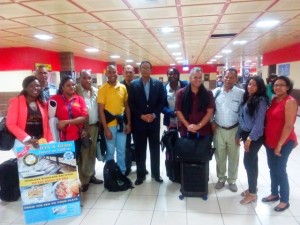 The impressive display booths mounted by CARICOM member states were a hive of activity on the opening day with Cuban and other business executives from participating countries showing strong interest in the products and services offered by participating Caribbean private sector companies and government agencies.

Some 15 country delegations are headed at ministerial level including Guyana and Trinidad and Tobago which are each represented by their Minister of Business Dominic Gaskin and Trade Minister Paula Gopie Scoon.

The fair features a number of business sessions including an inaugural business forum that will address Cuba’s foreign capital business opportunities portfolio and another on the Mariel Special Development Zone.  Additionally, a number of matchmaker meetings are already taking place between and among companies with interest in a range of sectors including tourism, energy, agriculture, manufacturing, electronics and communications.

The government ministers from Guyana and Trinidad and Tobago were also involved Monday in bilateral meetings with their counterparts from Cuba and other participating countries.  Gaskin said in an invited comment that representatives of his country’s private sector are looking for markets for a variety of products including rice, pasta, condiments, fish, confectionaries and rum in addition to examining multi-destination tourism that could facilitate visitors to Cuba going on to Guyana.

Gerry Gouveia, chief executive officer of the Roraima Airways Group of Companies in Guyana says that the Havana Fair has provided his company to pursue discussions with the Cuban authorities about introducing additional direct air links between Guyana and Cuba.

“There will also be discussions about the setting up of a joint commission between the Private Sector Commission of Guyana and the Cuban Chamber of Commerce for the purpose of further strengthening commercial relations between the two countries,” Gouveia, who is heading the Guyanese private sector delegation, said.

(This media coverage of the Havana International Trade Fair is made possible through the support of the Roraima Group of Companies of Guyana).