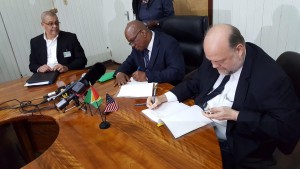 Guyana and the United States (US) on Monday inked an agreement, clearing the way for this country to share bank account information about American citizens and permanent residents with the US to help stamp out offshore tax evasion.

“Today’s signing makes a significant step forward in our countries’ efforts to work collaboratively to combat offshore tax evasion, an objective that mutually benefits our two countries,” American Ambassador to Guyana, Perry Holloway said at the signing of an agreement with Finance Minister, Winston Jordan to implement the  US’ Foreign Accounts Tax Compliance Act (FATCA) in Guyana.

Holloway explained that the FATCA accord allows for financial institutions in Guyana, through the Guyana Revenue Authority (GRA), to share information with its American tax enforcement counterpart about the bank accounts held by US persons and certain foreign entities in which persons hold substantial ownership interest.

Meanwhile, GRA Commissioner General, Godfrey Statia said Guyana has in recent times been receiving information from the US about Guyanese- American bank account holders there in keeping with a Tax Exchange Information Agreement and 25-year old laws. “What was happening was the process that we were not adhering to…I know prior to nje being there, there was the incorrect procedure being used whereby we were not sending it (requests) to the IRS (Inland Revenue Service). We were sending it to the (financial) institutions which we can’t do and that is the reason why…We have no jurisdiction over those external institutions,” he said.

Finance Minister, Winston Jordan said the Guyana-US FATCA agreement provides for automatic sharing of tax information between the two countries. “The FATCA agreement represents another step in our country’s cooperation with each other in order to combat money laundering and tax evasion and avoidance,” he said.

He said the automatic exchange of information has the potential to increase transparency, cooperation and accountability among financial institutions and encourage taxpayers to voluntarily disclose all relevant information to tax authorities,” he said.