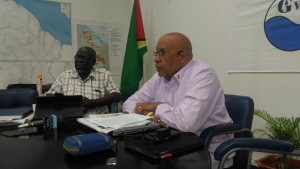 The Guyana Water Incorporated (GWI) is testing a new chemical to purify water, despite concerns by some experts at the Pan American Health Organisation (PAHO) and the Guyana Food and Drug Administration (GFAAD).

The GFAAD is said to be very concerned that GWI is using the new chemical and has signaled that efforts would be made to have the utility company stop using it.

PAHO experts have advised that Antifek, the brand name for polihexanide, was not recommended for use in Haiti after the earthquake because it only removed bacteria and there was no efficacy data on viruses and protozoa.

In correspondence to GWI, Senior Advisor, Water, Sanitation and Environmental Health, Caribbean Office of Caribbean Program Coordination, PAHO/WHO, Adrianus (Ton) Vlugman stated that the long-term use of polihexanide, a pesticide,  “seems to me a very risky substitute for chlorine.”

So far, only Thailand’s Food and Drug Association has certified polihexanide which is produced in that country.

Consultant in Epidemiology & Environmental Health at PAHO\WHO Guyana, Dr. Mariano Bonet Gorbea has told GWI’s Chemical Engineer, Deon Anderson that “the registration in Thailand is not enough to accept the product in Guyana for using systematically in water treatment.”

GWI Chief Executive Officer, Dr. Van West Charles told Demerara Waves Online News that tests and comparative analyses show that polihexanide, a biocide disinfectant, have been showing promising results. “The other product has been demonstrating great effectiveness in the removal of pathogens. We have done some workings in our labs and is being used by a few other places in Guyana, not by us,” he said.

Van West Charles said GWI was still using mostly chlorine for water purification, but he touted polihexanide as a good option for hinterland areas and maintaining purity levels in black tanks that are connected both to GWI’s system and roofs for the collection of rainwater. “We are testing it and using it some jurisdictions.” The Canada-based Trent University is also assisting with some testing, the GWI boss said.

Asked to react to the fact that a number of PAHO experts have recommended that polihexanide is not a good option and was not even recommended in Haiti, he noted that chlorine dissipates quickly and that compromises water quality. “Although we put out good water from the tap, when it goes into your black tanks there is no guarantee that that water is of the same quality that we put out so we are looking at all of those possibilities,” he said.

Among the priority places are schools, hospitals and health centres as well as riverain communities; the latter being often affected by diarrheal diseases. He said GWI has ordered equipment and already has some in-house to monitor the residual impact of polihexanide.

Anderson, in requesting information from PAHO back in June, 2016 had stated that “The product has been proven to consistently disinfect potable water, leaving it free of total or fecal coliforms. We are in possession of the test results from countries such as Nigeria, Ghana, Pakistan, etc. showing its consistent eradication of both total and Fecal coliforms among other micro-organisms. The residual lasts longer than chlorine in distribution networks and is not consumed by organics/ inorganics in the water, as is the case of chlorine.”