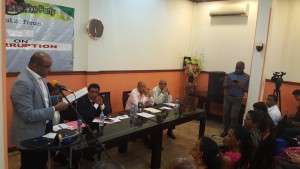 Opposition Leader, Bharrat Jagdeo is unapologetic that he had unilaterally allocated radio licenses to, among others, his People’s Progressive Party Civic (PPPC)

“You hear every single day ‘friends and family’ and, of course, the PPP got a license and I don’t mind that one that one, I am a politician so they can accuse me of that one,”  he told a recent PPPC forum on corruption.

The Opposition Leader noted that the party’s radio station, Mirror and Guyana Times newspapers are “openly sympathetic to us” and “would tend to carry our views more and so at least you get an explanation from us.”

The Guyana National Broadcasting Authority (GNBA) has repeatedly said that it is opposed to political parties holding broadcast licenses.

The former Guyanese leader  in citing his allocation of radio licenses, rejected claims by the PPPC opponents that he is a racist. “I a supposed to be racist but they don’t say that six of the ten licenses were given to non-Indians…” The non-Indians he alluded to are Maxwell Thom, Rudy Grant and Alfro Alphonso.

On the matter of Radio Guyana Inc; which is associated with Dr. Ranjisingjhi Ramroop a close friend of Jagdeo, having been issued with radio frequency  licenses by the National Frequency Management Unit (NFMU), he said Ramroop was not awarded a license out of favouritism but it was because Vieria Communications had won a High Court case concerning government’s refusal to grant that company a radio license.

I-Radio, now MixFM, was birthed by Telcor whose corporate principals had been Omar Lochan, then a former Permanent Secretary in the Ministry of Natural Resources and the Environment. Lochan is also the husband of Jaya Manickchand, sister of former Education Minister, Priya Manickchand.

That entity’s directors are Kamini Persaud-a niece of Jagdeo and wife of then Minister of Natural Resources and the Environment Robert Persaud- and Ruth Baljit his sister.

I-Radio has since been sold to Trinidad and Tobago’s Guardian Media which is part of the Ans McAl Group of companies.