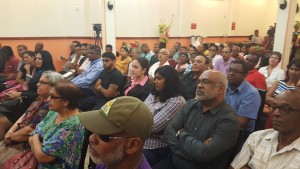 A section of the audience at the PPPC-organised public forum on corruption that was held on Wednesday, October 12, 2016 at Sleep Inn, Brickdam.

The People’s Progressive Party Civic (PPPC) parliamentarians will boycott President David Granger’s address to the Parliament on Thursday because he is expected to preach double-standards on good governance, Opposition Leader Bharrat Jagdeo said.

“We will not listen to him. We need to send a signal to this country, PPP supporters as well as ordinary people, that we will not allow the hollowing out of our democracy because if we don’t stop the initial steps they are going to grow into an avalanche of activities aimed at denying us our rights,” he said.

Jagdeo said the PPPC lawmakers would attend the National Assembly only to participate in the debate on the National Youth Policy.

Speaking at the conclusion of a public forum on corruption held at Sleep Inn Hotel, Brickdam, he said it was pointless for the PPP’s 32 parliamentarians to listen Granger especially since he on Wednesday decided to suspend Public Service Commission Chairman (PSC), Carville Duncan. “What we have here is a total abuse of the Executive…,” he said, recalling that Duncan had been summoned to meetings by Minister of State, Joseph Harmon and President David Granger and allegedly offered a financial package to demit office because he (Granger) did not want blood on his carpet.

Government has denied offering Duncan a cash package to give up the PSC Chairmanship, a full-time post.

Attorney-at-Law, Anil Nandlall, meanwhile, announced that he has since moved to the court to challenge the constitutionality of the Tribunal Hearing on, among other grounds, that Duncan has not been found guilty of stealing Guyana Power and Light’s monies because the trial was still continuing in the Magistrates’ Court.

Jagdeo flayed the President and Harmon for summoning Duncan who is insulated from political interference and asking him to demit office because he is facing charges of allegedly stealing director’s fees from the Guyana Power and Light.  Against that background, the Opposition Leader contended that the President was about to be two-faced on good governance and respect for the constitution. “You then come tomorrow (Thursday) to the Parliament which is the place where our laws are born, the palce where our democracy is protected and then lecture us on good governance. It will be a dereliction of our duties as MPs to sit and listen to another lecture on good governance when the President, the Executive cannot respect the holder of a constitutional post and give him a fair hearing in this country,” said Jagdeo, a former President of Guyana.

He added that the larger issue is not about Duncan but when “they come for you” members of the wider Guyanese society.

Jagdeo argued that Duncan has been engineered out of office as PSC Chairman because he was regarded as an obstacle to the employment of supporters of the governing coalition parties. “His presence there means that they can’t pursue this agenda and the agenda is to remove people and to replace those people with supporters of the APNU whether they are qualified or not, as we have seen.

He serves as a block to the implementation of their agenda and the agenda doesn’t bode well for the country,”  Jagdeo said. The Opposition Leader alluded to the unilateral establishment by the executive of the Public Service Staff College whose employees, he said, are only a select-few elite Afro-Guyanese.

Former Junior Finance Minister, Juan Edghill contended that Duncan’s suspension by the President was a signal to Afro-Guyanese who might contemplate being associated with the Indo-Guyanese dominated PPP.  “This effect of the crassness of the move against Carville Duncan is not just about him being chairman of the Public Service Commission but is about him being a Black man that is supposedly a supporter in their eyes of the PPP and it is a way of teaching Black people a lesson- you support the PPP, this is what we will do to you,” he said. Edghill, he further, argued that the government has made Duncan the sacrificial lamb.