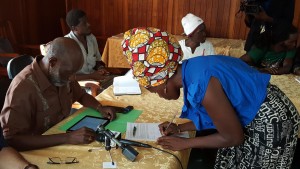 A representative of the Rastafarian organisation signing the Compact.

Several Afro-Guyanese organisations on Wednesday formally bonded themselves together to take up President David Granger’s challenge to craft a programme of activities for the United Nations Decade for People of African descent and meanwhile address urgent issues.

“It is recognised that this Compact represents a short-term approach for the resolution of issues and situations that require immediate action and that in time will be overtaken by the operationalisation of the plan which the President mandated Cuffy250 Forum 2016 to craft in response to the UN’s Declaration on the Decade of Peoples of African Descent,” said Vincent Alexander of Cuffy250. The “collective of Afro-centric organisations” says the work-plan for the Decade for People of African Descent is expected to be completed this month for presentation to government. The plan will focus on five broad areas- education, equality, employment, reparation, the economy and a broad category named “others”.

Alexander nine of the 14 organisations that have signaled their intention to sign the Compact. However, the African Cultural and Development Association (ACDA) has not signed on to the Guyanese of African Descent Compact 2016, on the grounds that it was still mulling the idea. “We have one indication that ACDA is still in the mode of contemplation. They have not said they will not sign but they have not signed today. They are still considering the matter,” he said.

An ACDA source, however, told Demerara Waves Online News that organisation has lingering concerns that Cuffy250 Committee has mobilized many virtually unknown organisations. The source noted ACDA has long been involved in the formulation of practical strategies and plans to develop businesses, and accessing lands and international financing. “We don’t know where these people come from, we are cautions,” the source said.

Alexander said the group of Afro-Guyanese organisations have decided to address some immediate and urgent issues before it is too late and decisions are taken that leave them out. One of them he pointed to was the need by residents of Wales-Goed Intent African Association to acquire 25 acres of land at the Wales Estate which is scheduled to be closed permanently later this year. “We know the government is moving ahead with a plan so unless that (acquiring the land) happens quickly, the chances are it will never happen. That’s nature of things that we want to deal with, to address things that are on the front-burner and need immediate action which, if not done, will result in them losing the opportunity being made available to them,” he said.  Another is the need by residents of Baracara, Canje, Berbice to address some land issues, shortage of teachers, and the need for a captain to operate a boat recently donated to the community by President David Granger.

“This compact reflects the view that African Guyanese are constantly faced with issues and situations that require attention, which attention if not forthcoming will result in lost opportunities,” he said.

The group meets fortnightly at the Boardroom of the Critchlow Labour College, Woolford Avenue, Georgetown.