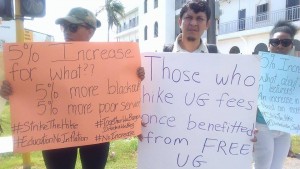 Several University of Guyana (UG) students on Monday began what is scheduled to be a week of protests against the University’s recently announced 5% increase in fees.

The students, who comprised of mainly first and second year Social Sciences scholars, said they are protesting the fact that the increase was made without their consent as well as them not seeing much improvement in the university’s facilities.

During an interview with Demerara Waves Online News, Jamicia Mc Calman, noted that the issue is not exactly the increase as it is the timing in which it has been imposed upon them. The second year Social Sciences student stated that, “a lot of students are saying they don’t mind the increase but what really are they paying for?”

“The services that they (UG) continuously say that will be changed you aren’t seeing any progress. As a matter of fact it’s like a backward ever, forward never movement that’s happening.” 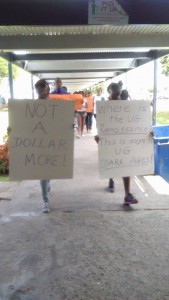 In agreement with Mc Calman was Ashley Wilson, who questioned the motives for the increase. “It’s not because it’s just 5%, it’s what the 5% is doing. What have they done for us to prove that they can increase our fees? There are still poor facilities, there’s not any improvements on campus,” she said.

Among the problems the less than 20 students listed as needing improvement are the lecture rooms’ dysfunctional Public Address (PA) systems, lack of ventilation in the classrooms, steady blackouts, and washrooms being in deplorable conditions. Those, they said, are supposed to be taken care of by the miscellaneous fees paid by students, which is now GYD$50,000.

In relation to this, McCalman stated that since the term started, “we haven’t had a lot of classes because of blackouts, the PA systems aren’t working; no microphones, so lecturers have to raise their voices to teach over two hundred students with just their voices…We went into a classroom last week and instead of seeing a room ventilated, it’s industrial fan in the room…There isn’t any progress, the washrooms are still in deplorable conditions, there’s a washroom by the Christian Room, it’s continuously flooding, the grass…they’re waiting for it to reach the same height as the university buildings before they can weed it, so no progress at all. As a matter of fact, it’s worse than it was last semester.”

Elsie Harry, another student, was adamant that she will not be paying the new fees. “We’re not paying this 5% increase. As a matter of fact, I’m going to pay my invoice as it is, and if the University of Guyana wants to tell me that I cannot come to school, I will come to school anyway because this is our university and decisions for our university cannot be made without us,” she boldly stated. 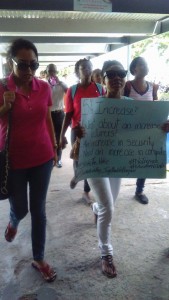 She said the university is a health hazard since garbage is not being collected on time, and she also mentioned the deplorable state of the toilets. As such, she said, “we are not paying 5% increase for a health hazard.
As such, the protesting students expressed their expectation that the increase would be going towards taking care of the university’s facilities.

As the small number of protesting students made their way around campus, they chanted, “Education, not inflation!”, “No increase!”, and “No 5%, get it from the government!”. Many stopped what they were doing to look on, and this prompted the picketers to shout, “Stop looking on, join in the strike!”

Several non protesting students were approached by this Demerara Waves Online News as the small number of protesters were making their way around the campus grounds. These non protesters expressed that they were neither informed nor aware of there being a protest. To this, McCalmon explained that the move was one of short notice, but that they will be protesting outside of the Office of the President on Tuesday and then back on campus on Wednesday. She encouraged students to come out an join in the “strike against the hike”.

Meanwhile, both University of Guyana’s Registrar, Dr. Nigel Gravesande and the newly elected UGSS President, Ron Glasgow, stated that the matter is engaging the administration at the highest level and, a meeting headed by the Vice Chancellor, Professor Ivelaw Griffith is scheduled to take place.

Both Gravesande and Glasgow declined to divulge information on the matter until after the meeting. The Registrar has promised the media a comprehensive press release on discussions made. It was revealed by both Gravesande and some of the protesters that the issue of a fee increase was slated to occur since 2014.

The UG administration is yet to issue a public statement on the increase in tuition fees.