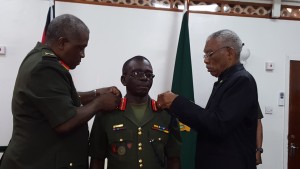 The outgoing Chief-of-Staff of the Guyana Defence Force (GDF), Brigadier Mark Phillips on Monday cited the need for more “assets” to patrol the country’s borders.

In his farewell speech before officially handing over to newly-promoted Brigadier George Alan Lewis as the next army chief, Brigadier Phillips said his tenure the army was “busy with contingency planning and reinforcement exercises to better define aggression on our borders.” He said the time has come for the Air Corps and Coast Guard’s capacity to be beef up without delay. “However, we all must now recognise the need for the almost immediate acquisition of air and maritime assets to safeguard our patrimony in order for us to exercise greater maritime domain awareness over our Exclusive Economic Zone and to have a faster operational reach into our hinterland and border regions,” he said.

The Air Corps is yet to be have adequate military airlift capacity and the Coast Guard is said to be in need of larger vessels to patrol coastal and inland waters. Except for the flagship Coast Guard vessel, “GDFS Essequibo”, the other  boats have been provided largely by the United States over the years.

Newly-appointed Chief-of-Staff, Brigadier George Lewis said the purchase of new equipment to assist with border security was among some of his immediate priorities in collaboration with the Defence Board that was still considering a number of proposals. ” Our mandate is to provide border defence and we have some challenges there which we definitely have to work on and it may involve some amount of re-capitalisation, acquisition of new equipment,” he said.

Brigadier Lewis’ tenure could end in January, 2017 at his next birthday.

Phillips said during his tenure he had placed great emphasis on training, a “high operational tempo” and vigilance in define and defend aggression on Guyana’s borders and support civil authorities to counter illicit trafficking on the coast and hinterland areas.

Against the background of the GDF having recruited a “substantial number of new soldiers” over the last three years, and re-established the Guyana People’s Militia as a semi-autonomous reserve force to mobilise and train Guyanese countrywide, he called on Guyanese to be willing to serve the army despite the many challenges.

“However, attracting, employing, training and retaining good people remain critical functions of the Defence Force and is certainly the mainstay of our defence policy. We want all Guyana t, therefore, view the Guyana Defence Force as a call to service and not merely an avenue for employment,” he said.

Delivering an address after inspecting a Guard of Honour, he credited both the People’s Progressive Party Civic and the A Partnership For National Unity+ Alliance For Change coalition administrations for having reposed confidence in him. In thanking the PPP-C government under then President Donald Ramotar for selecting him to serve as the eight Chief of Staff in September, 2013 and the APNU+AFC coalition government led by President David Granger following the May 2015 general elections “for having the confidence in me to continue serving” until Monday, October 3, 2016., he highlighted the importance of the military being professional at all times.

“This vote of confidence by both major political groupings in Guyana, I consider a fitting testimony to my earlier commitment and promise to the people of Guyana to let professionalism be my guide on assuming the office of Chief of Staff,” he said.