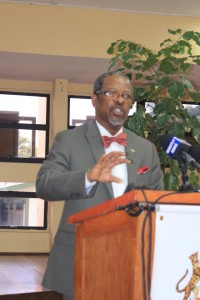 University of Guyana (UG) Vice Chancellor (VC) , Professor Ivelaw Griffith on Tuesday afternoon said he is prepared recommend that the 5 percent increase in tuition fees be postponed, hours after a group of the institution’s students had protested the sudden hike.

Speaking with the large gathering at the George Walcott Lecture Theatre (GWLT), Griffith said he has met with the University of Guyana Students Society (UGSS) leadership and he is prepared to make a recommendation to one of the governing bodies of the university in relation to the fee adjustment.

“I am going to be proposing to the body that has the final say in this, the financing general purpose committee that we no longer proceed with the 5% this year,” Griffith stated, three days after students were informed by e-mail that UG’s Finance and General Purposes Committee had approved an annual 5% increase in the tuition fees effective for 2016/2017 and 2017/2018 Academic Years. Except for Law and Medicine, the tuition fees would be $GYD168,000 per academic year instead of $160,000 plus a GYD$50,000 facilities fee.

Professor Griffith told students that they deserve more that his apology for the sudden hike imposed upon them, and said the university had not done what they were supposed to have done administratively in relation to the email received by students, announcing the change.

The Vice Chancellor explained that there must be an upwards adjustment overtime of the University of Guyana’s tuition and it would be unreasonable for students to expect it to be so low if they want to see improvements. However, he admitted that, “it is inappropriate for us to have introduced, five weeks into the semester, the adjustment.

Also speaking to the students, Registrar Dr. Nigel Gravesande stated that there has been a communication gap between his office and the software committee in making the necessary adjustments to the invoices sent out to students at the beginning of the semester. He explained that in 2014, the University Council held a meeting where it was decided that fees were to be adjusted incrementally at a rate of 5%. That, he said was slated to take effect at the beginning of the 2015-2016 school year, but due to unrest, elections and other setbacks it did not take place.

Gravesande said the Council, which includes the presence of student representatives, again decided in April 2016 that the adjustment would take place for the 2016-2017 school year, but due to the lapse in communication the sudden announcement took place.

He said it was only last week that it was discovered that the adjustments had not been made to the invoices.

The students who were involved with the protest on Monday had told Demerara Waves Online News that they would be continuing protests and even if protests had ceased, the advocacy would continue. The VC’s announcement was met with applause.