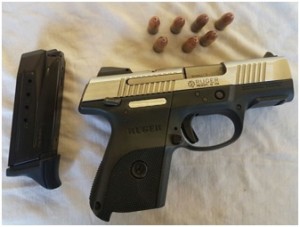 The gun and ammunition that were allegedly found in possession of Eon “Killa” Warde at his home at Central Amelia’s Warde, Linden.

A 25-year old man, who was sentenced to five years imprisonment in his absence for robbery under arms and unlawful possession of a gun and ammunition, was Monday  caught and would face fresh gun and ammo charges.

Police said the man was arrested at his home at Central Amelia’s Ward, Linden home with one unlicensed 9mm Ruger semi-automatic pistol with seven matching rounds.

He was sentenced in absentia recently for robbery under arms and unlawful possession of firearm and ammunition.