Police search for suspects in attempted heist outside Demerara Bank 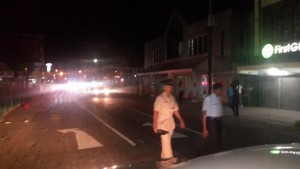 Police early Monday morning went to several night clubs for a number of suspects involved in a foiled robbery outside Demerara Bank shortly after midnight.

Professional Guard Service (PGS) security guard, Michael De Clou, who threw the bag with the money back in the vehicle, was shot and injured during an exchange of gunfire with the robbers.

The incident occurred at about 12:30 AM outside Demerara Bank, Camp  Street and South Road where the PGS van had gone to deposit monies it had collected from Royal Castle, Sheriff Street.

Hicken said searches were carried out at Palm Court, Rio, Monaco and other places in search of the suspected robbers. “We sped into operation mode,” he said. No vehicle has been found abandoned anywhere.

The guards said they believed that they were being trailed by suspected robbers in car. When the PGS vehicle arrived at the bank and the guards, including one with the bag of cash, exited, the bandits ordered them to hand over the bag.

Instead De Clou tossed the bag back in the vehicle and engaged the bandit. In the end, he was shot and injured and the bandits escaped empty handed.