Trio to be charged for planting ganja; several acres of plants destroyed 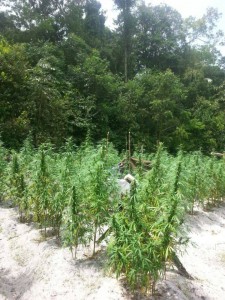 Several of the marijuana plants that were discovered by the Guyana Police Force’s Drug Eradication Unit at Arraray Village, Upper Essequibo.

Three men are Friday expected to be arraigned for the cultivation of nine acres of marijuana that were destroyed by police in the Upper Essequibo village of Araray, the Guyana Police Force said in a statement.

“Three males who were found tending to the cultivation are in custody and will appear in court tomorrow, charged with cultivating prohibited plants,” the law enforcement agency said.

The 12-hour exercise, according to that law enforcement agency, led to the discovery and destruction of about eight thousand plants ranging in heights from one foot to ten feet and several nurseries with over three thousand seedlings.