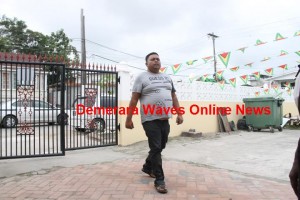 President David Granger on Thursday said convicted Guyanese drug-lord Barry Dataram, who fled the country to avoid being jailed for cocaine trafficking, might be travelling on a forged foreign passport.

“Even though Mr. Dataram might have a foreign passport, it might be a forged passport. I would urge all law enforcement agencies to use every legitimate measure to bring him back into this jurisdiction so that he can serve his sentence,” he said on this week’s edition of the ‘Public Interest’ television programme.

Dataram, who is an American citizen, is also wanted by the United States (US) for drug trafficking. Previous extraditions failed several years ago after his lawyers had successfully mounted a legal challenge.

Granger urged law enforcement agencies to network with foreign counterparts in neighbouring Suriname and other parts of the Caribbean in a bid to locate and transport Dataram back to Guyana to pay the GYD$164.2 million dollar fine and serve his  60-month jail-term.

“…so my information is that he is not travelling on a Guyanese passport. So after his disappearance, and we weren’t aware of his disappearance, we continued to work with our partners in the Caribbean to bring him to justice. If he is in Suriname as is suspected, the Commissioner of Police has been instructed to try to ascertain his whereabouts in neighbouring countries but he is not using a Guyana passport that much we know,” the Head of State said.

He and his reputed wife Anjanie Boodnarine did not turn up to court on the last three occasions after Magistrate Judy Latchman had indicated that she would have announced whether they and two other persons would have been freed.

In the end, the Magistrate ruled that only Dataram was found guilty while his wife and the two men were acquitted. She fined and sentenced him to jail in his absence.

President Granger registered his displeasure at Dataram’s disappearance from Guyana, but made his displeasure known. “Mr. Dataram is a person of interest. He is a well-known character in Guyana and I would expect that even though the judicial branch is separate, there should be a greater level of alertness on the part of the Magistracy, in the Judiciary, in matters like this and I don’t regard it as a failing on the part of law enforcement agencies but it is definitely an error which ought to have been avoided.

He added that “The danger posed in having somebody who is now a convict out there, out of the jurisdiction is going to be harmful to our national interest so I would urge the law enforcement agencies to alert their counterparts in neighbouring states.

The President observed that while more could have been done, it must be noted that the resources currently available to law enforcement agencies are not sufficient to patrol every kilometer of the country’s borders and ports. However, Government, cognizant of the need for additional resources, has begun to acquire the equipment necessary to aid the fight against narco- trafficking and other forms of illegal activity.

“It is physically impossible to control every kilometer with our present resources. We are working on the acquisition of surveillance aircraft, we are placing mounted police in wide open areas, we are acquiring ATVs and surveillance equipment,” he said.

The cocaine was found on April 16, 2015 at Dataram’s  house located at 661 Silver Dam, Fourth Avenue, Diamond Housing Scheme. He, his wife and the two men were in the house at the time of the bust.

2016-09-29
Denis Chabrol
Previous: Teachers, public servants’ salary increases are not the same- Granger
Next: Trio to be charged for planting ganja; several acres of plants destroyed