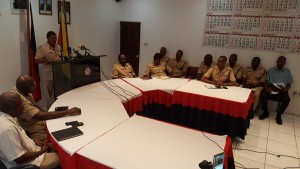 He said seven of those were committed with stolen .32 pistols.

He chided licensed firearm holders for betraying the responsibility that had been entrusted to them and instead “contributes to the general endangerment of the society.”

Ramnarine said latest statistics show that seven .32 pistols, one shotgun and one 9MM pistol were stolen since July 2016.

The acting Police Commissioner described such a situation as “ridiculous” and “of serious and grave concern.”

Pointing to a few instances, he said an East Coast Demerara businesswoman left her handgun in her wardrobe and returned home to discover it was stolen during a burglary, an intoxicated and sleepy man took a nap in his vehicle at Plaisance and when he awoke he discovered his phones and gun gone, and in another case a man was assaulted and his gun fell out of his waist at a social gathering.