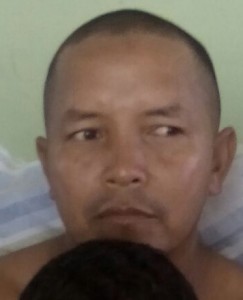 Nathan Heyliger was on Thursday placed on $600,000 bail after being charged for causing the death of Kuru Kuru resident Carl Dundas.

The accused appeared before Chief Magistrate Ann Mc Lennan, and was told that on September 11, 2016 he drove in a dangerous manner thereby causing the death of the 41-year-old Dundas.

Still nursing injuries from the accident, Heyliger pleaded not guilty to the charge. He is scheduled to return to Court on October 18, 2016.

On the night of the accident, Heyliger, Dundas, his wife Rona Dundas, and her friend Alana Barker were all on their way home from Amerindian heritage celebrations when the vehicle they were traveling in collided with a truck.

Dundas succumbed to his severe head injuries, Heyliger suffered a broken leg and several lacerations on parts of his body, Rona was treated and sent away from hospital, and Barker was uninjured.

2016-09-29
Denis Chabrol
Previous: Drug-addicted father hacks son to death
Next: Jealous man who lashed his wife with wood gets off but faces trial for escape from police custody