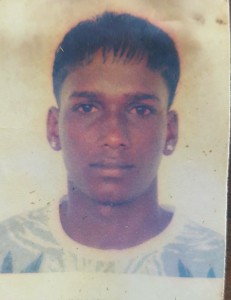 A drug-addicted man chopped to death his son at Annandale, East Coast Demerara.

Divisional Police Commander, Assistant Commissioner Marlon Chapman said the assailant, Amernauth Chand, has since been arrested and has confessed to the crime.

Relatives said Amernauth Chand killed his son because he intervened in altercation that stemmed from his mother refusing to give him (the father) GYD $200 to buy marijuana. Failing to get the money, he began assaulting her.

Prior to being hacked to death, Mohesh parted his parents gave his father the money he needed.

However, the argument continued. At that stage, the father entered his son’s bedroom with a cutlass and began chopping him.