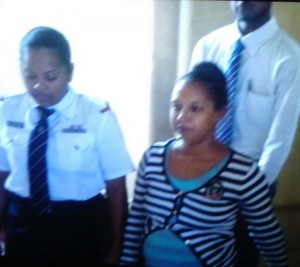 Joselina Osaria and an Immigration Officer who stood as interpreter for her.

A pregnant Dominican Republic national appeared at the Georgetown Magistrates Court for overstaying her time in Guyana.

According to police Prosecutor Neville Jeffers, Joselina Osaria arrived legally at the Cheddi Jagan International Airport on April 24, 2015 and her passport was stamped by immigration officials for a month’s stay. The prosecutor continued that on September 26, 2016 the defendant visited the Agricola Police Station to make a complaint. Since she was unable to communicate with the officers there in English, she was asked to produce her passport. It was then discovered that the pregnant Osaria had overstayed her time in Guyana. She pleaded not guilty to the charge and was granted bail at $20,000.

However, Chief Magistrate McLennan ordered the defendant not to be released until she presents her proper Guyana address in Agricola.

She is scheduled to reappear in court on October 7, 2016.

2016-09-28
Denis Chabrol
Previous: When the illegal aircraft landed in Guyana and who knew?- the CoI to find out
Next: El Dorado Trading burglar jailed