When the illegal aircraft landed in Guyana and who knew?- the CoI to find out 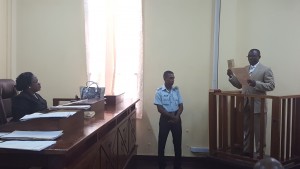 The Commission of Inquiry into the discovery of an aircraft in southern Guyana is expected to determine whether there was effective sharing of information among the security forces.

“Whether the passage of information between the security forces was timely and whether there is need for review of the process having regard to the national intelligence system,” states one of the terms of reference for the probe to be conducted by Retired Brigadier Edward Collins. ‎

This provision of the ter‎ms of reference comes against the background of the fact that at least one law enforcement agency was aware that the aircraft had been in that location for at least three weeks prior to the official announcement of its discovery by the Guyana Defence Force (GDF).

The army said the twin-engine Cessna aircraft was found September 13, 2016 on the ground near Yupukari Village, Region Nine.

Collins is expected to determine whether there were any breaches of Guyana’s laws and “whether it can be concluded from the information available and the relevant evidence and witness testimony that the agencies of the State acted in a manner consistent with their security responsibility.”

Demerara Waves Online News has previously reported that at least one law enforcement agency had known of the presence of the plane there and had been awaiting the return of technicians to repair the aircraft to arrest them and any other associates.

Brigadier Collins, who was sworn in by Chief Magistrate Ann Mc Kennan on Wednesday morning at the Georgetown Magistrates’ Court, has until November, 2016 to complete and submit his report to President David Granger.

Collins is also tasked with advising the President on the operational effectiveness of the various agencies of the State and the adequacy of existing human resources, technology and equipment in Region Nine as well as the coordination among the various state agencies and other local and regional entities as it relates to the sharing of intelligence.
‎
The probe will begin on September 28,2016 and will be conducted mainly at Lethem and Yupukari as well as any other place. ‎

Authorities have already determined that the US registration number on the plane is fake. ‎