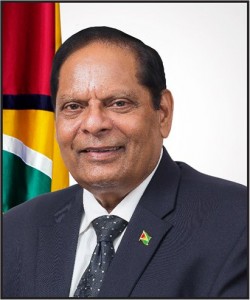 Prime Minister Moses Nagamootoo, whose ancestors are Tamils, will be awarded the title of “Crown Jewel of World Tamils” as well as participate in several other key events for Tamils during an official visit to India.

Nagamootoo’s office said that he was selected by the Award selection committee to receive the award on October 4th, 2016.

During his September 29 to October 11 official visit to India, he would be participating  in the “World Tamils Economic Conference”  scheduled for Sunday October 2nd to Tuesday, October 4th, 2016, Tamil Nadu, India and the 29th Convocation of  Bharath University, which will be held on Wednesday, October 5th, 2016.

“He looks forward to forging stronger ties between Guyana and the World Tamil community, especially entrepreneurs and industrial leaders of Tamil Nadu. Guyana has an open-door policy that welcomes all investors and economic partners,” the Prime Minister’s office said in a statement.

The aim of the World Tamils Economic Conference is to bring together the Tamils and Indian community in the world, in order to foster cooperation and tap the vast human and material resources for a collective growth.

As Chief Guest of the 29th Convocation of Bharath University, he would be awarding the degrees and delivering the convocation address.

Nagamootoo’s office said he considered the invitation “an honour on his first visit to Southern India from where his ancestors migrated to Guyana almost 170 years ago.”  He is reportedly pleased to be associated with the “prestigious university, which provides high quality graduate and post graduate education to nearly 10,000 students from around the world.”

Carl Greenidge, Minister of Foreign Affairs and Second Vice-President, will perform the functions of the Prime Minister. Prime Minister Nagamootoo is expected to return to Guyana on Wednesday, October 12, 2016.