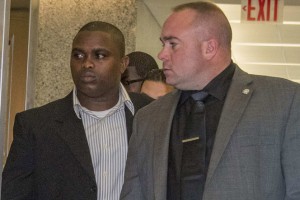 A New York State Attorney fears that a New York Police Department (NYPD) cop charged with murder in an off-duty, road-rage incident can flee the United States on a  Guyana passport, prompting a judge to  rule him a “flight risk” and set bail at US$500,000.

The New York Post also reports that 37-year old Wayne Isaacs is headed to jail because he cannot raise the bail money.

He was unable to cut a deal with a bail bondsman following his arraignment in the fatal July 4 shooting of Delrawn Small, also 37, a source close to the cop said.

Isaacs will be held in protective custody on Rikers Island under terms of an order from Brooklyn Supreme Court Justice Alexander Jeong, the source added.

Jeong set Isaac’s bail at $500,000 bond or $300,000 cash after the state Attorney General’s Office said Isaacs had “ties to another country” and a Guyanese passport.

“I agree that your client is a flight risk,” Jeong told defense lawyer Stephen Worth.

Small’s relatives burst into applause — and one cheered “Yes!” — when court officers slapped Isaacs into handcuffs and led him to a holding cell.

The courtroom was packed by supporters on both sides, including three members of the Police Benevolent Association wearing union windbreakers, but there were no cops in uniform present.

As first reported by The Post, Isaacs was indicted Monday on charges of second-degree murder and first-degree manslaughter in Small’s slaying on Atlantic Avenue in East New York. 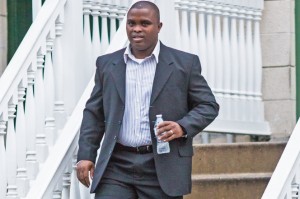 Video exclusively obtained by The Post shows Isaacs opening fire — in front of Small’s girlfriend and two kids — almost immediately when Small charges over to Isaacs’ car to confront him.

The charges against Isaacs are the first brought by Attorney General Eric Schneiderman since Gov. Andrew Cuomo last year named him special prosecutor for all police killings of civilians in New York.

Schneiderman plans to discuss the case at a Manhattan news conference Tuesday afternoon.

Isaacs, wearing a black suit and white shirt, remained silent and kept his eyes down throughout his 20-minute court appearance, during which Assistant Attorney General Joshua Gradinger warned he might run away to avoid a maximum 25 years to life in the slammer.

Gradinger also called Small’s killing a “brutal, deliberate act, where this defendant fired not one, not two, but three shots into an unarmed man.”

Worth said he would use the surveillance video “to prove [Isaac’s] innocence,” saying that when Small approached, “clearly he wasn’t coming over to give [Isaacs] his best wishes.”

“To suggest that this is a wanton killing is ludicrous,” Worth said.

Worth also insisted there was “no reason to believe he’s going to flee” because Isaacs is married with two kids, and he noted that NYPD cop Peter Liang was released without bail when he was charged with manslaughter in the fatal, 2014 shooting of Akai Gurley in a darkened housing project stairwell.

Liang was sentenced to five years’ probation and 800 hours of community service in April by a judge who reduced his conviction to criminally negligent homicide.