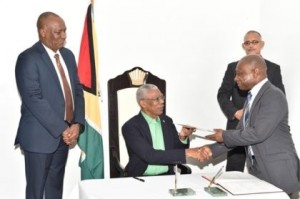 Minister Greenidge took the Oath of Office on Wednesday in the presence of President David Granger, Minister of State Joseph Harmon and senior officers of the Disciplined Services.

A spokesman for the Office of the Prime Minister said Nagamootoo left Guyana on Wednesday for India where he would be attending three major activities.

Nagamootoo, who is Vice Chairman of the Alliance For Change (AFC), is expected to return on October 12, 2016.

The parliamentary recess ends on October 10, 2016. The next sitting of the National Assembly is tentatively set for October 13.