Two men were Wednesday charged for the murder of a manager of Gafoor’s  at his East Bank Demerara home two months ago. 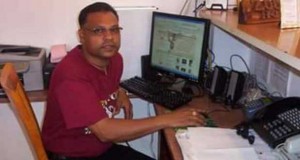 According to the facts read out by Chief Magistrate Ann McLennan, on July 21, 2016 at Herstelling East bank Demerara, David Outar, 24 years old, and Patrick Ross, 22 years old, murdered 55-year old Terry Lakhan during the course of a robbery.

Outar, a Gafoors employee, represented by attorney at law Gwendolyn Bristol and the unrepresented Ross from Toolsie Persaud Limited, were not required to plead to the indictable charge and they were remanded to prison until October 25, 2016.

Police had initially treated Lakhan’s death as suicide because a rope had been found around his neck in the lower flat of his apartment at Back Street, Herstelling. A neighbour had reportedly seen someone running out of the man’s yard prior to the discovery of his body.