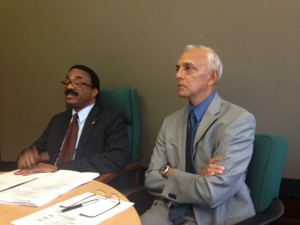 Minister responsible for Local Government, Ronald Bulkan says Town Clerk, Royston King’s recent decision to remove vendors from the Bourda Market area on Robb Street, Georgetown was illegal because the Council did not make such decision.

The Minister also told the Mayor that her interpretation of the roles of officers contradicts Section 8A of the Municipal and District Councils Act. “The section repeatedly makes clear that the elected council is supreme; the Town Clerk is but an administrator, like any other administrative officer, hired to carry out the decisions of the council,” Bulkan said.

In a letter to City Mayor, Patricia Chase- Green, Bulkan also chided her  for defending King’s actions that he said were based on the poor sanitation of the area by the vendors.

The Minister frowned on the Town Clerk’s order to remove the vendors on Robb Street between Alexander and Bourda Streets on September 6, 2016 without the authority and involvement of the “supreme” elected council and two other layers of councillors

“The decision by the Town Clerk to remove vendors from the Robb Street location without being so directed by the council was therefore outside of his authority and your defense of his action was unexpected, and while

understandable, was not in conformity with the law. In any case, the Market Committee and the constituency representative should have been involved in the making of such a decision, in addition to the council,” said the Minister of Communities in a letter dated September 21, 2016.  That letter was copied to Attorney General, Basil Williams; Deputy Mayor, Sherod Duncan and the Town Clerk.

The first sign of open political discontent by Bulkan’s A Partnership for National Unity (APNU)over the Town Clerk’s sudden removal of the vendors without notice had come from Andriea Marks who held up placards during the statutory meeting on September 13, 2016 calling for King to go.  Deputy Mayor, Sherod Duncan of the Alliance For Change (AFC) has already signaled that he would be tabling a no-confidence motion against King because he is fed up of his bad decision-making.

The minister responsible for Local Government says according to the Municipal and District Councils Act a  “competent” Town Clerk is an administrative officer rather than executive official who performs duties “only assigned to him by law and be directed by the decisions of the council.” “Evidently, the law does not contemplate any scenario in which the Town Clerk makes an order with regard to the management of the municipality in the absence of an order from the council. Further, it is unthinkable that the Town Clerk may make such an order without the knowledge of the council and after doing so inform the council of his own decision. To do so would be to exceed his authority and usurp the mandate of the council,” Bulkan told Chase-Green. 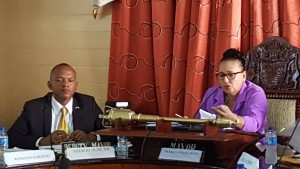 The Deputy Mayor, in a memorandum to the Mayor on September 7, 2016, questioned what is the protocol for the Town Clerk to inform the substantive Mayor of serious issues such as the removal of vendors which he, as Acting Mayor, had only learnt of “by the way” one day earlier. “It would require a willful suspension of belief that an exercise of that gravity would be carried out without the Mayor’s knowledge, even as a matter of courtesy. I cannot fathom that if I am discharging all the responsibilities of the Mayor in the absence of the substantive Mayor why the total and wanton disrespect. This sets a dangerous precedent,” he said in the memo that was copied to the Minister of Communities.

The Town Clerk, in a letter to the Mayor, said there was no need to inform the Mayor’s Office of the action against the vendors on Robb Street because their presence there was “suspended” as part of a “basic routine activity” to sanitize the area and “part of regular house-keeping activities of the Market Office. “Administration did not remove vendors from Robb Street; their activities were suspended to allow for general sanitization of that entire area. This was necessary as the condition of that area was noticeable unhealthy,” King told Chase-Green.

He said the condition there at the time had included stagnant street drains, indiscriminate dumping of garbage in that area by vendors and others; storage of fruits, vegetables and greens offered for sale on the road; encroachment of vendors on a public roadway; the creation of a suitable environment for criminals and the infringement of the legal boundaries of a private property by vendors.