Bulkan to Chase-Green: Funds must be provided to acting Mayor 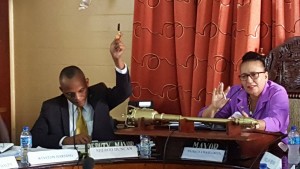 Deputy Mayor, Sherod Duncan raised his hand to respond to an announcement by City Mayor, Patricia Chase-Green (next to him) who refused to entertain any discussions.

Five days after Local Government Minister, Ronald Bulkan strongly signaled to Georgetown Mayor, Patricia Chase-Green that funds must be made available to the Deputy Mayor whenever he is acting for her, she said on Monday she was fed up with his gripes and would  be handing over all of her office allowance to him.

In announcing her decision, Chase-Green did not refer to Bulkan’s letter to her dated September 21, 2016, but instead said she was tired of the Deputy Mayor trying to portray her as a “monster.”  “If it going to bring peace to the Deputy Mayor’s mind let the money go to the Deputy Mayor’s office. I am tired and I am fed up of hearing it every single day. It is unfair to me. It makes me look as If I am a monster in this chair,” she said.

Dismissing suggestions that everything is being awarded to the Mayor’s Office and the Deputy Mayor gets none, she said her monthly allowance of GYD$25,000, which is paid every three months, purchases items that are shared with the Deputy Mayor’s Office. She said she would continue to use her own funds.

The Mayor centered or announcement on the Office allowance, not on Duncan’s concerns about  the absence of allowances and privileges for the acting Mayor.

Although Deputy Mayor, Sherod Duncan raised his hand to indicate that he would have liked to speak, the Mayor said she was not entertaining any discussion on her announcement.

Duncan said he would be refusing the monies in the manner that Chase-Green has announced it because it would be a clear violation of the law. “The Mayor has to refrain leading from vexation and lead according to what the law requires,” he told Demerara Waves Online News. “Whether those funds amount to a dollar or ten thousand dollars, the law must be followed.”

Bulkan told the Chase-Green that the Municipal and District Councils Act states the circumstances under which the Deputy Mayor must be elevated to the office of Mayor and given access to the funds of the municipality. “There can be no doubt that the letter and spirit of the law contemplates that there must at all times, be a Mayor within the jurisdiction of the municipality an commonsense would reveal that this would more so apply to the capital city. Therefore, it is expected that whenever the Mayor leaves the jurisdiction, the Deputy Mayor shall act,”  the Minister of Communities said in the letter copied to Attorney General and Minister of Legal Affairs, Basil Williams; Deputy Mayor, Sherod Duncan and Town Clerk , Royston King.

Section 22 under Remuneration of Mayor and Councillors states that “The City Council in each financial year appropriate out of the funds of the Council a sum not exceeding in amount the sum prescribed by Part 1 of the Third Schedule, to be placed at the disposal of the Mayor in the Manner set out in that Schedule. Under ‘Performance of Mayor’s duties when unable to act’ it states at Section 17 (5) “In the event of the Deputy Mayor or a Councillor performing the functions of the office of Mayor for seven consecutive days or more, the Deputy Mayor or Councillor, as the case may be, shall, during such period, have at his disposal, in lieu of the Mayor, the funds placed at the disposal of the said office in the manner specified for the payment of such funds.”

Bulkan made known his position in the face of Town Clerk, Royston King’s spirited defence of the Mayor in a letter dated September 9, 2016, by interpreting the law to mean that it does not mean that if the Mayor is overseas, he or she would be unable to perform his or her functions.  “If the Mayor is out of the jurisdiction but can still perform the functions of the office then there is no need for the Deputy Mayor or any Councillor to perform those functions. Again, if the Mayor is out of the jurisdiction ad there are no functions to perform, say for example, presiding over statutory or other council meetings or attending a State, official or other such functions, then there is no need for anyone to perform those functions because there are none,” King said.

Three days later on September 13, 2016, the Deputy Mayor wrote the Mayor questioning the Town Clerk’s logic and cited the absence of transportation for him that led to his late arrival at a central government-organised function on September 7, 2016 when there was heavy rainfall. “The larger issue here is , activities may not be officially on Your Worship’s itinerary locally, when you are required to be out of the jurisdiction officially or on personal business but circumstances occur. Will the administration there and then rent a vehicle for the Deputy Mayor’s usage as it does in your “official” absence? This makes no sense to me. Additionally, above I said, features that go with the Deputy Mayor performing the functions of the Mayor seem to be activated selectively,”  said Duncan.

The Minister said that while government has pledged not to intervene in the workings of local democratic organs- village, neighbourhood democratic, town and regional democratic councils- it would not stand idly by whenever they breach the law. “As you are aware, central government has a policy of non-interference with the workings of local democratic organs. However, central government reserves the right to intervene whenever and wherever there is a clear violation of the law,” said Bulkan. He also recalled that President David Granger has said that that Guyana’s capital, Georgetown, is in a special category and would always be subject to particular attention by central government.

In a September 7, 2016 memo, the Deputy Mayor told the Mayor that events in her absence from Guyana have left him “puzzled, embarrassed and perhaps in many ways humiliated” because the Town Clerk’s Office had not informed him of transportation and other transition arrangements during her visit to Chile and Trinidad. “This is unacceptable.” “Georgetown is the oldest municipality and I refuse to believe that there is no consistent, coherent system which exists as to the mode of operation, transition or custom as per when the Deputy Mayor is performing the duties of Mayor,” Duncan told Chase-Green.