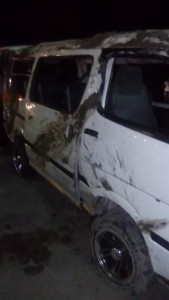 The bus that toppled on the Nismes Public Road, West Bank Demerara, leaving one dead and several others injured.

A bus conductor was  killed and more than 12 others injured Monday night when a speeding bus turned turtle on the Nismes, West Bank Demerara.

Dead is well-known bus conductor Jerry Waldron of Goed Intent Village, West Demerara. At least one passenger named Ron was seriously hurt. He was among more than a dozen who were rushed to the West Demerara Regional Hospital.

Persons at the scene said Waldron was killed on the spot when the Route 31 minibus toppled.

The accident occurred on a road that became slippery as a result of drainage works being conducted in the vicinity of Gafoors.

An eyewitness said the bus was speeding when the mishap occurred.