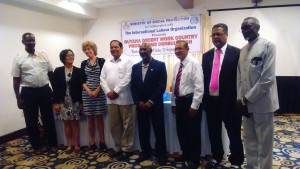 Amid public servants’ continued disappointment with government’s one to 10 percent final pay offer for 2016, Prime Minister Moses Nagamootoo said the increase being offered signals it commitment to improving the lives of the working poor.

However, General Secretary of the Guyana Trades Union Congress (GTUC), Lincoln Lewis gave the 16-month old David Granger-led administration low marks for its relations with the workers in promoting occupational safety and health and involving the labour movement in keeping with Guyana’s constitution.

Addressing the opening of the International Labour Organisation-organised Decent Work Country Programme Consultation held at Herdmanston Lodge, the Prime Minister said government is dissatisfied with the improvements in programs addressing key issues in the labour force, the Prime Minister said government would continue the effort for decent pay for decent work. On this note, he made mention of the government’s final offer of “an additional equitable 10% (salary) increase to the lowest paid employees.”

That, he said, “must say something about the attitude of this government towards the working poor.” He continued that you cannot talk about decent work without addressing the working poor. The Prime Minister, who is performing presidential duties,  stated that they are incrementally paying back the many years of wage debt owed to public servants. He also made mention of the Christmas bonus given to the public servants, which he said was to ensure, “not the American dream but at the very least the small Guyanese dream”.

The Guyana Public Service Union (GPSU) is yet to officially say whether it would be taking the pay dispute to conciliation and eventually arbitration, but has called on government employees to wear blue ribbons in solidarity with the call for a living wage. Finance Minister, Winston Jordan has said that government could not pay more than it could afford to provide sustainably in future years.

The Prime Minister highlighted the need for employment statistics, while suggesting the reformation of Guyana’s laws to increase the protection of labourers.

“If you don’t have statistics you will believe lies…,”he told the opening of the .  He reminded attendees at the gathering of the lack of collective labour bargaining, and up-to-date statistics during the then People’s Progressive Party Civic (PPPC)-led administration.

Meanwhile, Mr. Lincoln Lewis in his remarks called on the government to “treat all equally” in keeping with the ILO’s Decent Work Agenda that provides for the respect of Guyana’s Constitution, laws, collective labour agreement, and the ILO’s core labour standards.

The veteran trade unionist urged government to respect the Decent Work Agenda as it forges ahead with building a green economy that will reduce reliance on fossil fuels and manage solid waste effectively. Lewis said the creation of a green economy on the three pillars of labour policies, sustainable development and the environment cannot be separated from basic workers’ rights. “We can’t tell people build the building without the appropriate protective gears. If you start wrong you’re going to end wrong. You have to do it right. This green economy is not about painting the place green and planting trees to make it green. It is about a collective…the achievement of this economy from labour perspective cannot be realised without implementing the Decent Work Agenda as a matter of principle and commitment,” he said.

He chided government for shutting out the labour movement in clear violation of Articles 38, 147 and 148 of the Guyana constitution have clearly outlined the role of the trade union as a major stakeholder in ensuring the economic path that would ensure workers are engaged in production and productivity.

“Thus today, the government who is hosting this conference for the social parody is called on to treat all equally. It is labour’s concern, as to efforts to sideline us and deny us of what is constitutionally designated for us…In the Granger-Nagamootoo administration, labour sees disrespect and disregard for our involvement at the decision making table,” said Lewis.

The APNU+AFC coalition administration has credited itself with returning the Guyana government to the bargaining table with the GPSU  for increased wages, salaries, allowances and other conditions of work.

The ILO workshop began Wednesday and will continue through Friday. The main focus of the workshop is the ILO Decent Work Agenda, which according to Director Claudia Coenjaerts, is not new to the Caribbean. During her remarks at the opening ceremony, Coenjaerts noted the need for coordination among ministries as well as the urgent need for a clearly defined and jointly developed agenda for labour and employment.

by Abigail Semple and Denis Chabrol