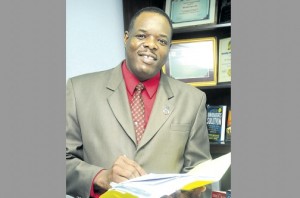 Chairman of the Caribbean Association of National Training Authorities (CANTA), Dr. Wayne Wesley said on Wednesday that there should be no need for the importation of workers.

Wesley spoke at the launching of Accreditation to Award Caribbean Vocational Qualifications (CVQ). The CVQ is a CARICOM approved award that comes under Council for Technical and Vocational Education and Training (CTVET) and which represents the achievement of a set of competencies. This award can be received by persons who have graduated high school, employees, new skills seekers, self-employed workers, and displaced workers.

Caribbean Examinations Council (CXC) Registrar Glenroy Cumberbatch also noted that some Caribbean countries have issued a requirement that no child must leave school without having CVQ accreditation.  The CVQ award is designed to assist individuals educated in technical and vocational areas in acquiring employment in Guyana and the Caribbean

Concerns have been raised in the past about the large numbers of  foreigners that have been  employed on major infrastructural projects such as the  Guyana Providence Stadium and Marriott Hotel. The then People’s Progressive Party Civic (PPPC)-led administration had said that Guyanese did not have the required specialized technical skills to work on the construction of that hotel.

During his remarks to an audience that included Education Minister Dr. Rupert Roopnaraine, Wesley stressed that education is too important for it not to have the party’s support. The Chairman called on Roopnaraine to assist the Council for Technical and Vocational Education and Training (CTVET) in acquiring funds. CTVET requires commitment on the part of the Ministry to ensure it functions properly, Wesley said.

In turn, the Education Minister stated that attention should be focused on the impact of CVQ on the Caribbean, and he challenged CTVET to push back the stigma that has previously hindered individuals from entering into the technical field.

Also in his remarks, the Education Minister again mentioned the issue of students writing and passing 24 subjects at the CSEC examinations. He said he wonders “what kind of examination is this that allows a child to write and to pass 24 subjects”, more so what kind of childhood is it that the child would have had. Roopnaraine then reiterated the need for a more rounded education system, with the involvement of culture, music, theater and sports.

The CXC  Registrar highlighted the graduate unemployment issue and the need for more communication, creativity, critical thinking, and collaboration within the education system. On creativity Wesley said,” learning something and regurgitating it is not a trait of an intelligent person.” Dr. Roopnaraine, who agreed with this, was of the opinion that there should be less regurgitation and more fun in learning.