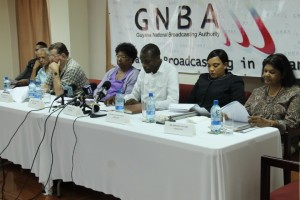 Chairman of the Board of Directors of the Guyana National Broadcasting Authority, Leonard Craig (white long sleeved shirt) flanked by other members of the Board at a news conference. Mr. Tony Vieria is second from left of Craig.

A major conflict has surfaced in the board Guyana National Broadcasting Authority (GNBA), even as that regulatory entity prepares to address the granting of several licenses by the Jagdeo-led administration and prepares to grant ones before next year.

“Despite his abusive and obstructionists approach to my tenure as Chairman of the GNBA, I have displayed extreme restraint and immeasurable patience and have continually pledged to work with him and all other members of the Board to achieve the best objectives and ensure Public Interest is served,” Craig said in a statement.

Demerara Waves Online News has been told that a long-running feud between Vieria and Craig has already reached Prime Minister Moses Nagamootoo whose portfolio includes the media. Sources say that Vieria has been relentless in pursuing the scrapping at all cost of several radio licenses that were unilaterally granted by then President Bharrat Jagdeo.

When contacted, Vieria confirmed that their differences had reached the Prime Minister who “settled the matter.”  Vieria said he did not hear anything about what Craig said and he declined to respond further. “I won’t respond to it and the Prime Minister has settled the differences between us and I doubt very much he would say anything like that,” Vieria told Demerara Waves Online News.

In apparent reference to Vieria’s stance, Craig said “I understand the impatience of those who have made application to become broadcasters and those wishing to see a reversal of the barefaced giveaway of the national airwaves by the then President Bharat Jagdeo and wish to assure those applicants and the general public that I share this burden and is working hard to guide the Board in the direction of reviewing all existing licences and grant new ones in time for January 2017.”

The GNBA Chairman’s reference to his thorny relationship comes against the background of claims by cable broadcaster, Kenwin Charles of Northwest TV that Vieria and fellow board member, Vic Insanally and Vieria have been attempting to “improperly force him out of doing business on the Essequibo Coast where he had made significant capital investments.”

Craig said he has since asked Charles to file a written complaint with him that would be the subject of a probe, although that cable operator has already informed Prime Minister Moses Nagamootoo of his grievances.  “If indeed his allegations can be substantiated it will constitute a major blow on the integrity of those members concerned.

I will carry out a complete investigation of the facts relating to matters raised by Mr. Charles, I will review the reports of the meetings, elicit a response from the members concerned and will release an official statement in the coming days,” he said.

The GNBA Chairman said the board at it statutory meeting on June 30, 2016 discussed the issue of regularizing all cable Broadcasters and agreed to have them take necessary steps to become fully compliant with the existing legal framework.” One necessary step for full compliance is for all Cable Broadcasters to enter into a settlement agreement with GNBA to pay all required fees with respect to the period during which they were un-regularized.”

He said the board had agreed that the Chairman of the Legal, Fees and Other Matters Committee lead a meeting with un-regularised Cable Broadcasters on the Essequibo Coast to arrive at a negotiated settlement only with respect to payment of fees up to the end of 2016. He added that those operators are expected to (re)apply for licences to operate in 2017 and beyond. Craig noted that these Cable Operators have repeatedly requested regularised status for a number of years.

The GNBA boss admitted that the board has been slothful, but at the same time said the new regulatory body that was appointed following last year’s general and regional elections had to first lay the regulatory groundwork that was largely absent. As much as there was a regulator in place the Broadcasting landscape remained largely unregulated, weak administrative and compliance structures existed. As such,through its various committees we set out to build an Authority literally from scratch.”

The GNBA Chairman said the authority has since developed Rules of Procedures for the operation and functioning of the Board, commissioned a Website (located at www.gnba.gov.gy) and established social media presence, drafted guidelines which include a code of practice for the Monitoring of Broadcasting, conducted a limited Broadcasting Survey to help inform it of the realities of the sector which will help to shape policies, drafted new regulations for the management of the Broadcasting landscape including the establishment of zones and new and more manageable fee structures and review and establish new financial structures and procurement policies.

The Authority says it has also improved relationship between  the Authority and Broadcasters, implement ne Human Resource policies which lifted the morale of the entire organization

held several meetings and consultations with broadcasters to solicit their views on developing a well regulated environment, adopted program rating regime to ensure that broadcasting in Guyana falls in line with internationally accepted moral practice and drafted guidelines for the evaluation of new applications “All of these are necessary and unavoidable forerunners to the development of a well-managed, transparent and level broadcasting landscape,” he said.