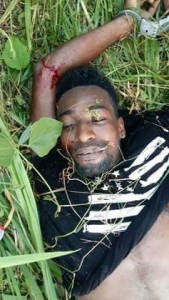 Surinamese police have confirmed that one of three robbers who they killed is Guyanese Rodwell Wiggins.

However, Guyanese police could not immediately speak adequately on the incident because, according to one senior officer, information has not reached his desk yet. The officer believed that other departments of the Guyana Police Force may be in contact with their Guyanese counterparts.

Wiggins up to recently worked at Oasis Taxi Service, Hadfield Street, Georgetown. As a taxi driver, he was described as someone who was always polite and mannerly.

Surinamese authorities say they have no indication that another Guyanese has been injured. They are maintaining that only Wiggins, Surinamese prison escapee Furgel Grant and two Jamaicans were shot.

The bandits were shot near their home shortly after they had raided a supermarket at Anamoestraat, Paramaribo, and held the him and his wife at gunpoint. While the bandits were tying the couple the man screamed for help and subsequently a neighbour came to their rescue.

Meanwhile in the aftermath at least three suspects were arrested, including two women one of whom was the partner of one of the dead men. Information indicates that the suspects were shot merely 30 yards from their home. When one of the women saw the body of her husband she became hysterical, which subsequently led police to her home.

At that place officers recovered several items which appeared to be the loot from previous robberies. One man and thee two women who were present were arrested and currently assisting police with the investigations.