Govt does not interfere in judiciary- PM Nagamootoo 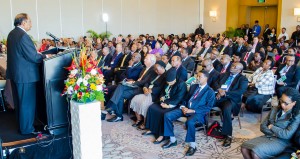 Prime Minister Moses Nagamootoo addressing the opening of the Conference of Commonwealth Magistrates and Judges at the Marriott Hotel.

The Guyana government on Monday assured that the country’s judiciary is free from political control and influence, while at the same favours the three arms of the State operating for their mutual benefit.

Prime Minister Moses Nagamootoo told the opening ceremony of the Commonwealth Magistrates and Judges Association Conference that Guyana’s judiciary enjoys legal  financial and institutional independence, probably the first in the Caribbean. He explained that  the judiciary, as a constitutional agency, has financial independence by ensuring that the State provides adequate resources for the perform of its functions.

He assured that the current coalition-led administration does not interfere in the functioning of judges and magistrates. “Our judges, in their adjudicatory role, are not in any way subject to any form of improper, inappropriate or unwarranted governmental influence.  That is a matter of which we in this present administration are exceptionally proud, and I make this claim without fear of contradiction,” he told the conference which is being held here under the theme “The Judiciary as Guarantors of the Rule of Law.”

The Prime Minister, who is currently performing the duties of President, stressed that government is committed to and bound by the rule of law rather than being erroneously above the law.

“It is on the latter that we have rested the structure of government, recognizing that constitutional limits on the exercise of governmental authority, which is a key feature of any democracy, require adherence to the Rule of Law.  Indeed, the quality of governance is defined by observance of the rule of law.  Good governance depends on it,”  he said. Nagamoootoo said government is committeed to equality before the law and that the law must apply equally to the government and the governed.

Chancellor of the Judiciary, Carl Singh said that in order to be able to guarantee the rule of law, Judges cannot be weak and timid but bold. He reiterated that Guyana has complete judicial independence and financial independence.  The Chancellor recalled an instance of tension between the executive and judicial branches of government in which a retired Chief Justice had publicly upbraided a minister of government for making inappropriate remarks.

On this note he stated that Judges must base their decisions on the law. He expressed concern that many see the Court as a place of punishment instead of a place where rights are established, and said the time is probably right for the enablement of a broad role in society so that individuals will understand that access to justice does not mean access to the courts.

Meanwhile, in his opening remarks, Chief Judge and President of the Caribbean Magistrates and Judges Association, John Lowndes spoke on the function of the rule of law.

He stated that the rule of law doesn’t discriminate between government and governance. He also declared that judicial independence is essential.

(by Denis Chabrol and Abigail Semple)