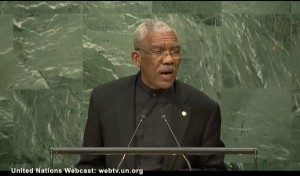 Guyana’s President, David Granger on Tuesday urged the United Nations (UN) to come down on the side of international law and send his country’s border controversy with Venezuela to the International Court of Justice (ICJ), even as that country continues to resist efforts.

Granger , who spoke on the first day of the global decision-making body’s meeting, accused Venezuela of resisting efforts by UN Secretary General, Ban Ki Moon to send the Guyana-Venezuela border controversy to ICJ also known as the World Court.  The 1966 Geneva Agreement provides for the Secretary General to seek a juridical solution if mediation such as the UN Secretary General’s Good Officer Process fails.

“Venezuela, for a full year since I spoke,  has stalled by every means as it intensified its  aggression against Guyana and thwarted all of the Secretary-General’s efforts to pursue ‘a way forward’ – at least in terms of a process that promises final resolution to the controversy,” the Guyanese leader said.

That Spanish-speaking western neighbour continues to maintain that the 1899 Arbitral Tribunal Award is flawed, while Guyana insists that that ruling marks the full and final settlement of the border between the two neighbouring South American states. Venezuela had respected the award for 60 years until a letter by a tribunal official, which had been opened posthumously, had claimed that the system was flawed.

Despite Venezuela’s posture, Granger pledged Guyana’s continued desire and cooperation with the United Nations in taking the controversy to the World Court for a lasting solution, protection against security threats and for intervention for peace and respect for international law.

“Guyana stands ready to have the International Court of Justice determine the matter with finality. We will work resolutely with the Secretary-General in his final months in office to free Guyana, and his successor, from this surreal burden,”

The President said he was constrained to point out that all of Guyana’s efforts – nationally, regionally and globally – for the advancement of development in an environment of peace and stability are being challenged by the territorial ambitions of our neighbour, the Bolivarian Republic of Venezuela.

The President said his appeal for international understanding of Guyana’s plight has nothing to do with Venezuela’s  internal political and economic turmoil. “The ordinary people of Venezuela are our sisters and brothers. Their agonies touch our hearts and we wish them early relief from their ordeal.”

Granger charged that Venezuela’s claims are a threat to his country’s existence as an independent nation. “They are a scandalous revival of the conquistadorial disease that once plagued its own history. They are a crime against our humanity, clothed in the verbiage of national honour,” said the President, a retired Brigadier and Commander of the Guyana Defence Force (GDF).