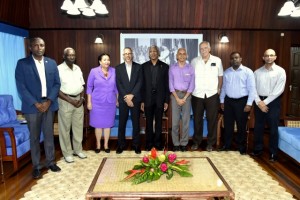 President David Granger says Central government has decided to play a “significant” role in helping Guyana’s cash-strapped city of Georgetown to earn more money, in the wake of concerns about a container tax and the introduction of parking meters.

“Money is important and whatever revenue garnering measures are being contemplated and anticipated, will require significant involvement at the level of central government, both in terms of identification as well as instituting and implementing,” he was quoted as saying in a statement issued by the Ministry of the Presidency.

The President said, during the meeting, that while he would not dictate to the Council, it is important that these agencies work together for the good of the Capital City as they all have a vested interest in its development.  “I believe we all want a safe city. We want a sanitary city and we want a city that is efficiently administered; one that can attract business, attract tourists and one that is safe for its own residents,” he said.

City Mayor, Patricia Chase-Green on Wednesday told a special council meeting that was held to discuss proposed amendments to the parking meter contract that the tripartite meeting would have been held at the Ministry of the Presidency on Thursday to discuss the container tax.

Government said Thursday’s meeting was held to lay the groundwork for the establish a Joint Committee within the next seven days between the private sector and the Council. Government said that body would be supported and facilitated by Central Government through the Minister of Communities, Mr. Ronald Bulkan aimed at ensuring “greater cooperation and collaboration among these stakeholders, on matters affecting the City.”

“I think that today’s meeting is very important in the sense that it signals agreement and acceptance of these, the major stakeholders, but what is required, is collaborative and cooperative approach as opposed to any confrontation  and it is only in that way that we can ensure that the level of efficiency that is needed to manage the city. It requires the efforts and inputs of all of us,” Granger said.

Bulkan would be responsible for coordinating and arranging the establishment of the Committee.

The Minister said that the administration welcomes the efforts and interest of the Private Sector to collaborate with the municipality and central Government, given that Georgetown is not an ordinary City but is the Capital City and as such, places a responsibility and obligation on all stakeholders and partners to work together for the common good.

Mayor Chase-Green, in an invited comment, said that the decision by the President will help to put the relationship between the Council and the private on a more stable footing.

“I am happy that the meeting was held this morning with the President to iron out some of the issues that we have concerning the City of Georgetown. The Committee that will be set up is one more or less that the President has put the concrete in because the Council and Private Sector Commission have been meeting before.  We have been trying to work together and of course, it will take some time for us to get to that one common understanding…but the Committee that will be set up will work hand in hand, all for the better of the community,” she said.

Mr. Persaud, too, in an invited comment, expressed thanks to the President for convening the meeting and for endorsing the need for dialogue between the business community and the Mayor and City Councilors of Georgetown.

“We believe that it is important for us to modernise the city of Georgetown and all our other towns with regard to the services provided to businesses. Local government organs are very, very important with regard to the competiveness of business. We are an important stakeholder in accessing the services of the city. We do understand that the city needs revenue to accomplish their vision. We believe that the vision for a modern city requires such revenue… I believe that the committee that has just been convened will facilitate such dialogue; such input. It will ensure that the business community understand what is taking place within the City Council and that the City Council understands the implications of some of the decisions on business, the price of our products, the consumer impacts and so forth so we believe that the committee will have the opportunity to have dialogue and we will work together towards a modern city,” he said.

At the height of criticisms of the parking meter contract and the lack of consultation, government conducted a review of the contract between City Hall and Smart City Solutions. Scathing criticisms of the deal were made by the Finance Ministry even going as far as recommending that the agreement be abolished and bids invited.

Several weeks ago, relations between the private sector and City Hall deteriorated to an all time low when City Police and officials set up barriers outside major wharves and demanded that GYD$25,000 be paid for each laden shipping container before it was allowed to leave for its destination.

Court action by the Shipping Association of Guyana (SAG) was later aborted to allow for the private sector and City Hall to discuss the matter.