US funding three-year project to improve justice delivery in Guyana 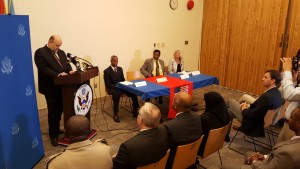 The United States on Friday announced that it would be funding a three-year programme at a cost of US$946,000 aimed at improving the quality of policing, prosecution and delivery of justice by the court system over the next three years.

“The main objective of this programme will be to increase effective criminal investigation in Guyana that leads to strong prosecutions and trials by boosting the technical capacity of the police, prosecutors and magistrates to work with criminal evidence in a supportive environment,” American Ambassador to Guyana, Perry Holloway said.

Holloway later told reporters that the project titled “Strengthening the Criminal Justice System in Guyana,” would include provision to train trainers as part of the overall objective of ensuring continuity beyond the life of the project.

Funded by the US State Department through the Caribbean Basin Security Initiative (CBSI), the project is informed by a series of assessment reports by the Bureau of International Narcotics and Law Enforcement Affairs that identified a series of challenges including extending police investigative procedures through the criminal prosecution process.

Programme Manager for the Canada-based non-governmental organisation, Justice Education Society, Evelyn Neaman said the project also aims to increase the use of video surveillance footage in prosecuting criminals and so make Guyana the leader in analyzing such evidence so that it could be admitted as evidence in court. “Surveillance evidence, also known as forensic video evidence, is one of the fastest growing areas of forensic evidence in the world. From convenience stores to banks and traffic intersections CCTV cameras are virtually everywhere. This project will continue to increase the capacity of specialized forensic video analysis units in both the Guyana Police Force and the National Forensic Science Laboratory through training and/ or equipment,” she said.

Public Security Minister, Khemraj Ramjattan welcomed the project in addressing “a number of deficiencies and defects and deficits” in improving rule of law in Guyana while ensuring the protection of the rights of suspects. “The civil rights- training as regards that- because we have come across what has happened in certain incidents, allegations of police taking some rather uncouth steps towards getting certain evidence and, off course, appreciation of the civil rights during the course of interrogation and investigation is so important,” said Ramjattan, a former lawyer for a teenager whose genitals had been set alight by police during a murder probe. The High Court subsequently awarded a multi-million dollar compensation to the boy.

The project is expected to address the standardization of law enforcement, enhancement of skills and knowledge of prosecutors, taking better statements by investigators, examination and cross-examination and the training of magistrates. Ramjattan highlighted the importance of improving the quality of the delivery of justice. “We also notice, too, that when there aren’t good policing and prosecuting even sentencing it affect the image of the country to the extent that trade flows and investments are affected and that’s a big picture kind of scenario that we have to take care of and this is the little thing that goes towards taking care of that big picture,” he said.

Canada, Britain and the European Union have also joined in improving the delivery of justice in Guyana.

Others present included Chancellor of the Judiciary, Carl Singh; Director of Public Prosecutions, Shalimar Ali-Hack, and the top Western envoys.