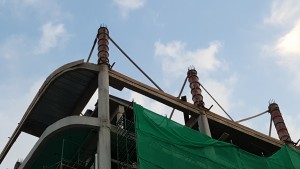 The seventh floor on which City officials have ordered that construction work cease.

The Central Housing and Planning Authority (CH&PA)  has told Georgetown’s Mayor and City Council that it has apparently flouted the law by eventually giving approval for the seventh floor to be added to the building at the corner of Robb and Camp Streets, Georgetown.

“We wish to remind you that under the Town and Country Planning Act, the City Council is legally bound to submit all applications and proposals of development for their permission or prohibition, as the case may be. This provision has not been complied with by your office,” the CH&PA’s Chief Development Officer, Fayola Moore told Town Clerk, Royston King in a letter dated August 29, 2016.

Since receiving a letter dated August 24, 2016 indicating that  approval has been given to the owner of the building, Rizwan Khan, for the seventh floor to be constructed, the CH&PA told the  Town Clerk that he granted approval in violation of a High Court injunction that has been granted blocking the construction of the additional floor. “The City Engineer’s Department is fully aware of this injunctive order and, yet in contempt of the High Court’s order, you are permitting the owner to proceed with his construction works in clear violation of the High Court’s order,”  Moore states.

The CH&PA  said it was not consulted by City Hall through the established protocols before giving Khan the green light, although he has been told that the matter has been reviewed by the relevant agencies. “Unless the application for the seventh floor has been submitted to the CH&PA, and has been approved by us, no approval should have been given to the owner of the building for this addition,” the CH&PA’s Chief Development Officer said.

The CH&PA wants City Hall’s Engineers Department to prove that it made the right technical decision.  “It is suggested that the documents and analysis be forwarded to the CH&PA So that this matter can be finalized,” the CH&PA official said.

The CH&PA has objected to the construction of the seventh floor on the bases that it will alter the skyline and that it would result in additional traffic congestion.  A CH&PA official has also contended that based on the intended number of occupants at any given time there would be insufficient toilets.

However, the owner says the building has sufficient toilets and he has conducted additional integrity tests to prove that the structure can accommodate a seventh floor.